Alessandro Michele dazzled with a theatrical show in a Roman necropolis in Arles. 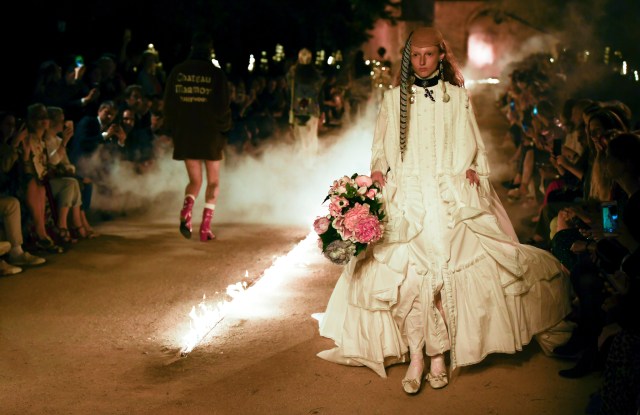 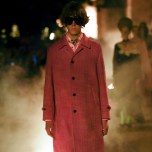 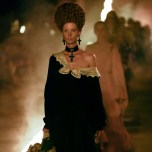 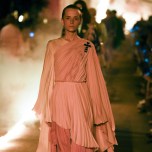 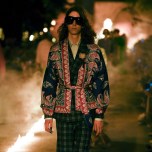 ARLES, France — If cruise shows are all about transporting the audience, Alessandro Michele deserves the award for the most dazzling spectacle to date in a season thick with powerful imagery.

The Gucci creative director chose the Alyscamps, a Roman necropolis in the southern French city of Arles, as the setting for his show, and took full advantage of the area’s epic history with a nighttime display that transcended space and time with a trove of references ancient and modern.

Clouds of smoke and rows of church candles bathed the open-air space in a Gothic ambience, enhanced by the haunting soundtrack of Claudio Monteverdi’s “Vespers for the Blessed Virgin.”

As night fell and guests including Saoirse Ronan, A$AP Rocky, Salma Hayek and Christian Lacroix took their places on mirrored cubes, a line of fire ignited down the central alleyway, signaling the start of the show.

The models swept out thick and fast in outfits so intricate, the eye struggled to keep pace. Michele sent out a dizzying 114 looks for women and men, mixing brand signatures — think plaid skirts, floral silk prints and tiger patterns — with outfits designed for fantasy characters ranging from rock stars to 19th-century widows.

Nestled amid the intricate embroideries were obscure references to local history, including some of the city’s former names, Gallula Roma and Urbs Genesii. Some outfits featured verse by Italian poet Dante Alighieri, one of the many artists to have found inspiration in the Alyscamps.

Fast-forward through time, and buckled bondage pants nodded to an Eighties-era Billy Idol. A sleeveless denim jacket was covered in sequined patches, while a flapper-style fringed dress was paired with Spice Girls-worthy fluorescent platform shoes.

Beneath the apparent anarchy was a wealth of marketable merch, including a good half-dozen collaborations that should fly off the shelves. The famed Pan logo that is a fixture on laundry bags, cocktail stirrers and bath amenities at the Chateau Marmont Hotel in Los Angeles appeared on items like a white sweatshirt.

Michele reprised the baseball team emblems of his fall ready-to-wear collection, as well as the Gucci logo rendered in the vintage font of video gamemaker Sega, first introduced two seasons ago.

In what is also becoming a brand signature, he nodded to fellow designers young and old. Harris Reed, the Central Saint Martins student who has shot to fame for designing tour outfits for Harry Styles, walked in the show dressed in a GG-logo lamé shirt and floor length brocade coat.

Another outfit was topped with a little cap sprouting an oversize glittered feather — a tribute to the late Frank Olive, a designer of hats for fashion houses, department stores and performers like Diana Ross and Peggy Lee.

Ronan noted the outfits were not that dissimilar from her most recent film costumes. “Myself and my friend are in it, and we were just looking at each other, because the really high headpieces are exactly what we wore in ‘Mary Queen of Scots,’ so watching the show really made miss that,” she mused.

Lacroix, who was born in Arles and often referenced the city’s traditions in his fashion designs, said he felt a special kinship with Michele. “When we talk to each other, I feel like I am talking to my little brother. We really are attracted to the same things. We have the same tastes, the same passions,” he said.

Indeed, one could imagine no better publicity for the city, which is enjoying a renaissance, thanks in large part to Swiss art patron Maja Hoffmann, who was also among the guests at the show.

Hoffmann has enlisted Canadian-born architect Frank Gehry to build a 185-foot tower that will be the center point of her Luma art foundation, opened in 2013. The sprawling site, with an estimated cost of 150 million euros, also encompasses abandoned rail yards that have been renovated and now house exhibitions.

The heir of the pharmaceutical giant Roche has invested extensively in the city, renovating two local hotels, the Hôtel d’Arlatan and the Hôtel du Cloître, and also owns the Michelin-starred organic restaurant La Chassagnette in the neighboring Camargue region.

Hoffmann said she welcomed Gucci’s decision to shine a spotlight on Arles.

“I think it’s really interesting. We do some trans-disciplinary projects, so it’s very interesting for us to also see this aspect. I mean it’s just amazing to see the crowd and the ‘caravane de la mode,’” she said, referring to the editors attending the itinerant cruise shows. “It fits very well also [into] our personality. We are quite original.”

Michele has a nose for culturally significant locations, having staged his previous cruise presentations in locations including the Dia Art Foundation in New York City, the Cloisters at Westminster Abbey in London and the Palatina Gallery in Florence’s Palazzo Pitti.

“After cruising New York, London and Florence, France was the most natural and organic landing place for Gucci. I wanted to pay my homage to this incredibly important and fundamental country for our culture and history,” he told WWD in a statement prior to the show.

“Among the many beautiful places in France, I chose Arles. I have always been a great admirer and a curious and avid traveler of that part of the South of France, which I visit at least once every year. I actually decided to have this year’s cruise show [here] last year, when I was in Arles for a long weekend in July,” he explained.

“All the places I travel to for cruise also belong to my personal story. They are heartfelt places, which have a lot of meaning to me. Nothing is accidental,” Michele added.

The show for 400 guests marked the first time the Alyscamps site has hosted an event of this magnitude. Arles is dotted with ruins from the Roman period, including an amphitheater, earning it a place on UNESCO’s list of world heritage sites.

In recent times, it has remained a magnet for artists and photographers, thanks to the Fondation Vincent van Gogh and the annual Rencontres d’Arles summer photography festival. Director and artist Julian Schnabel was in town recently to film his latest feature, “At Eternity’s Gate,” starring Willem Dafoe as van Gogh.

Gucci has made a donation to the city to support its artistic heritage. The show in Arles marked the beginning of a French season for the brand, which will decamp exceptionally to Paris Fashion Week in September.

“He understands that the brand sometimes has to make decisions to maintain the brand equity and he’s very flexible and intelligent. Of course, going away from Milan in a season could be a problem for the week, but overall, we go back,” he said.

Indeed, Milan could ill afford to lose a powerhouse like Gucci, which last year topped 6 billion euros in sales for the first time. Organic sales at the brand have grown by more than 35 percent for five consecutive quarters, and the company is set to map out objectives at an investor day in Florence on June 7.

If proof were needed of its reach, the entertainment at the afterparty came courtesy of none other than Sir Elton John, who will wear the label for his three-year “Farewell Yellow Brick Road” tour.

As light bathed the magical setting, the British singer performed hits such as “Your Song,” “Rocket Man” and “I Guess That’s Why They Call It the Blues,” capping an evening of sensory overload — in the best possible sense.

A waiter nearby proffered a tray of shot glasses, exclaiming: “Vodka!” Make that a double.