Christelle Kocher showed her cruise collection on a passenger ferry in Marseille, as part of the third edition of the OpenMyMed festival. 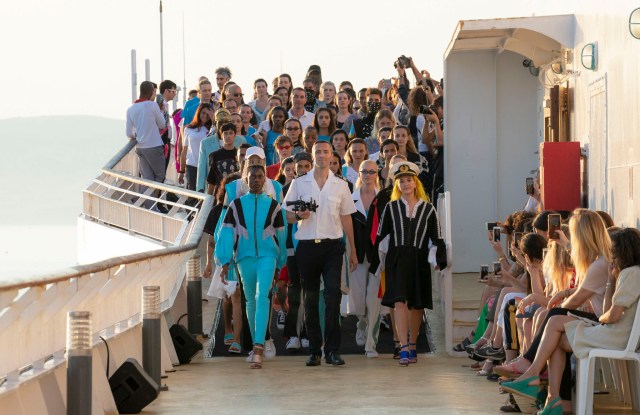 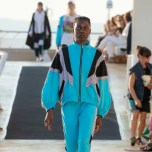 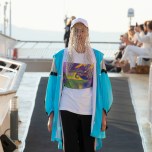 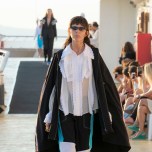 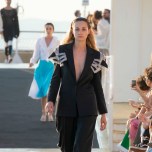 Marseille is having a fashion moment.

After staging shows in New York and Tokyo, Paris-based label Koché on Tuesday alighted in the French city, known as the gateway to the Mediterranean, to unveil its cruise collection on the deck of the Danielle Casanova, a passenger ferry freshly returned from Tunisia.

And next Monday, Simon Porte Jacquemus will be showing his first men’s collection in another outdoor setting nearby.

Koché’s Christelle Kocher was down south as the special guest of the third edition of the OpenMyMed festival, and is known for her guerrilla-style shows in public venues like a bookstore and a shopping arcade.

In parallel with the show, she has curated an exhibition of her favorite artists and is displaying a selection of her designs in empty storefronts in the city center, all under the tongue-in-cheek title: “Le Sud Bébé!” (“The South, Baby!”)

The slogan appeared as a colorful logo on T-shirts and a black hoodie, the latter coupled with baggy shorts in a trippy Nineties-raver-style print. The blurry floral motifs were a novelty for Kocher, who ran the pattern – inspired by the drip paintings of Bernard Frize – through a thermal camera filter to give it a psychedelic spin.

It played into the central theme of the show: a playoff between sporty, urban pieces – think dad jeans spliced with white nylon track suit pants – and more feminine designs in tune with the seaside setting.

Fluttery nylon capes, breezy white cotton shirts and flowing djellabas lent the collection a romantic ease. Drama came in the form of embellished pieces, like rhinestone-encrusted leggings and tops, or a black trouser suit dotted with rows of multicolored pearls.

During a preview of the collection in Paris, Kocher said the resort lineup was geared towards expanding her more accessible offering, with T-shirts that retail from 100 euros, while remaining true to her couture roots.

“That’s how I wanted it from the start. We have the customer who is looking for exceptional pieces. At the same time, we have a very young following and for these customers, the price is super important. What I like is to mix these universes, but also for everyone to be able to have more accessible pieces,” she said.

For the soccer-mad Marseille crowd, she offered items made in the signature light blue of the Olympique de Marseille team, a local institution. That the designer has previously partnered with OM’s arch-rivals Paris Saint-Germain shouldn’t be held against her: in this World Cup season, all’s fair in love and football.