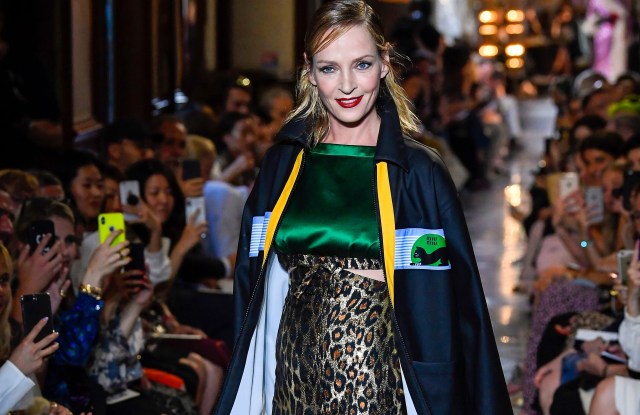 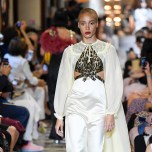 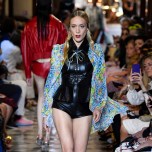 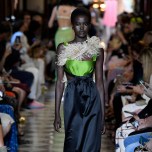 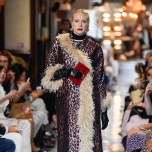 Between a heat wave, the Gay Pride march and France’s 4-3 World Cup win against Argentina, the atmosphere in Paris on Saturday was electric — and that was before the first celebrity hit the runway in Miuccia Prada’s star-studded Miu Miu resort show.

Uma Thurman, Kate Bosworth, Gwendoline Christie, Chloë Sevigny, Sadie Sink and Rowan Blanchard were among the stars-turned-models at the event, held at the Hotel Regina as street-cleaning crews rolled by outside.

In case you’re wondering how much advance planning is required to assemble such a cadre of Hollywood luminaries under one roof, the answer is: virtually none.

“We did it in one day. We decided in the morning: ‘Let’s do it,’ and we asked and everybody said yes,” Prada said with a laugh. “They loved the idea of doing the show.”

Such is the power of the Miu Miu Club, the name of the one-night-only hot spot the designer has created for her resort outings.

Editors and VIPs found a key to the members-only hangout placed on chairs — ranging from bar stools to plush armchairs — that were scattered throughout the lobby of the Belle Époque hotel.

“Of course, I am the boss of the Miu Miu Club. I really love girls,” declared Prada, noting that the brand has commissioned female directors to direct short films for its ongoing “Women’s Tales” project since 2011.

The “girls” paid her back in spades. Blanchard opened the show in a slinky black satin column dress sprouting pink ostrich feathers in the back, heralding a parade of Sixties-flavored evening gowns and negligees — think “Mad Men” meets “Valley of the Dolls.”

Spliced in among the rhinestones and ruffles was Prada’s brand of retro-futuristic sportswear: zippered HotPants and boxy color-blocked cardigans and coats, some in cute Lilly Pulitzer-style animal prints, mixed with wide-collared jackets in glossy leather or bleached denim.

“The collection was about day, night and bed, because we are in a hotel,” she explained, noting that she enjoys more freedom with the Miu Miu line than with her main Prada collection. “It’s not the ‘serious’ one, so actually it’s a lot more creative. You feel less pressure.”

To whoops and cheers from the crowd, Naomi Campbell worked a gray cable-knit cardigan like a weapon of mass seduction (not since Marilyn Monroe in “Let’s Make Love” has a bulky sweater looked so sexy.)

Sevigny stepped out in a black leather peplum blouse and shorts with a frothy giraffe-print mini robe, while Christie rocked a lilac leopard print lamé coat with a champagne-colored ostrich feather boa cascading down the front.

But it was Thurman who stole the show, peering over her sunglasses in an oversized black raincoat that she unzipped to reveal an emerald satin and gold leopard lamé dress with a cutout back. The actress famously wore a lilac Prada gown to the Oscars in 1995, and the rest, as they say, is history.

“I have, like, a 30-year relationship with Miuccia since I went to the Oscars in her dress all that time ago, and it was such fun. It was a lark!” Thurman said as she kicked back in the hotel bar after the show, while Prada sat at a neighboring table with controversial director Roman Polanski, artist Francesco Vezzoli and French filmmaker Agnès Varda.

Lily Collins, meanwhile, was content to watch from the front row. Wearing bright blue eyeshadow and her hair secured with a bow-shaped clip, she has spent the last six months shooting an adaptation of Victor Hugo’s “Les Misérables” for British TV.

“It’s nice to come here on the weekend and have a little bit of glam time, because I’ve been living the life of Fantine for quite a while,” she said.

Bosworth, who walked in a graphic cardigan slung over a sheer cream baby doll, revealed she got some good advice from the “youngsters” backstage. “Taylor Hill is one of my favorites — she’s such a sweetheart and she gave me a couple of tips as to where to keep my eye line,” she reported.

Her husband, director Michael Polish, was there to film the action, which will be featured in the inaugural episode of the pair’s Instagram channel, @vakatetv, which documents their travels. While Bosworth has collaborated with brands ranging from Topshop to J Brand, she noted this was her first time on a catwalk.

“When I went in for my fitting, they asked me to walk, and we all laughed — because you know, I can barely walk on the street, much less a show,” she confessed. “But I had an absolute ball.” So did we.