In one of the most highly anticipated designer debuts ever, Raf Simons catapulted the house into a new, vibrant era just as John Galliano did before him.

IsSixWeeksAfterFashionWeek = false
By Bridget Foley and Miles Socha and Joelle Diderich on July 2, 2012 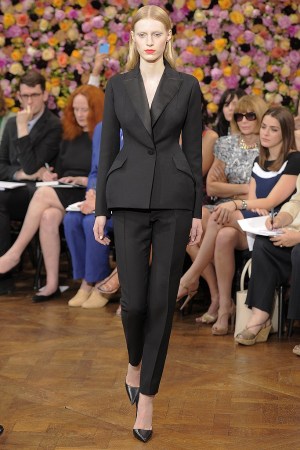 PARIS — Fashion is about dreams. On Monday afternoon, as Raf Simons launched his Christian Dior era in a grand residence in a series of intimate rooms, the walls of each covered in densely packed, floor-to-ceiling flowers — white orchids in one room, deep purple delphiniums and multiblooms in another — Bernard Arnault and Sidney Toledano must have experienced the best kind of fashion dream: a dream come true.

In one of the most highly anticipated designer debuts ever, Simons catapulted the house of Dior into a new, vibrant era just as John Galliano did before him. Two-thousand-twelve seems a different world than 1997, today’s world one in which serious couture-hungry markets have exploded in far-off places, flush with customers interested not only in statement eveningwear but clothes for less demonstrative moments. Simons covered both exquisitely, with confidence, high chic and, most importantly, the sharp modernity essential if Dior is to regain its position among the houses that drive fashion — as well as in its rivalry with Chanel for megaluxury-brand superiority. After the show, Arnault called his yearlong designer search worth the wait. “I didn’t want to rush,” he said. “It was really a question of choosing the best person for the job, and he stood head and shoulders above the rest: the greatest talent of the moment for Dior, the greatest house in the world.”

Upon arriving at the posh venue, one felt that tingle of fashion event. Yes, there was people-watching aplenty, with Jennifer Lawrence and house ambassadors Marion Cotillard and Sharon Stone on hand, as well as a phenomenal multigenerational assortment of the supportive competition — Azzedine Alaïa, Marc Jacobs, Donatella Versace, Riccardo Tisci, Olivier Theyskens, Diane von Furstenberg, even Pierre Cardin and Jean-Louis Scherrer, as well as Alber Elbaz, who, at his men’s show on Sunday, mentioned that he would attend. “We designers today don’t hate each other the way they used to,” he offered in explanation. Postshow, Jacobs declared Simons’ collection “absolutely magnificent,” while Tisci called it “very Raf” and “the future of fashion.”

Tisci nailed it, certainly at the couture level. In this age of obsessive brand-building on the global scale, couturiers have a tremendous challenge. They must infuse the dream of fashion within a reality that speaks to rich, sophisticated, often-entitled clients whose expectations run as high as their thresholds for sartorial seduction. The couturiers must do it while staying pathologically on brand, the better to fuel their labels’ subcouture moneymaking endeavors.

A glorious reality permeated Simons’ clothes. Walking into a house and finding at his sudden disposal Dior’s vast resources both outside it (that flower budget!) and within (the miraculously skilled atelier), even a confirmed minimalist renowned for his control might have gone a little mad.

Not Simons. Not once. His first look said it all: a tuxedo featuring a Bar jacket of modified cut so that it looked more suited to a chic dinner party this evening than a 1948 fashion spread. The black tailoring continued all sleek and adult until out came a black bustier miniparty dress — “cut-off ballgown” read the line list — over cigarette pants, a look followed by a trio of similar pairings only with feistier dresses in lively, colorful embroideries. These signaled the importance of making Dior resonate as not only modern but more youthful. Ditto some amazing party frocks, each one a gentle ode to couture craft, one in wide bands of pale pink and blue feathers, another in reed-thin strips of organza and chiffon.

Still, young actresses and young Eastern money aside, at its heart couture remains far from a girlish indulgence. Simons brilliantly handled the back-and-forth between sophisticated elegance and the younger end of his range, always with a fierce focus on construction and subtly of detail. Nor was that dichotomy his lone point of contrast. He worked with various weights — deep blue astrakhan and mink, and light-as-air pastel mesh for suits and dresses. Against his ample blacks and grays he flaunted his love of color — a simply flamboyant coat in “Dior Red,” a high-impact evening pairing of sheer T-shirt and skirt in shocking citron. Some looks carried their own contrast, featuring different embroideries in front and back, one side a traditional floral, the other an abstract graphic the designer dubbed “futurist.”

Throughout, Simons telegraphed respect for the house founder via his invocation of such archival wonders as the Bar, the florals and a range of gray tweeds, while keeping his feet and his message planted firmly in 21st-century terra moda.

The collection was not only beautiful but the work of an already-established fashion star imposing his own brilliant aesthetic upon an iconic legacy without a trace of intimidation. This allows Dior to move on finally and definitively from one magical chapter in its history — and at their height, the Galliano years were magical — with every indication of another commencing. Bravo, Raf. Congratulations, Dior.

— Bridget Foley, with contributions from Miles Socha and Joelle Diderich