“The basic idea for me is that I like the idea of freeing up couture,” Raf Simons said before his show. 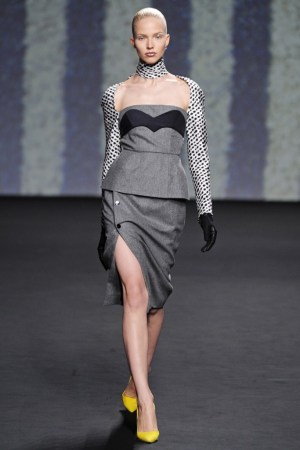 This was a complicated collection. Complicated in the most literal sense, with a whole lot going on, drawn as it was from Raf Simons’ sartorial studies of women from four reaches of the world: Europe, Africa, Asia, the Americas (sorry, Australia).

It was complicated as well for reasons other than seasonal fashion whim. “The basic idea for me is that I like the idea of freeing up couture,” Simons said before his show.

Freeing couture. Making it less precious and more accessible to those fortunate women for whom accessibility is about lifestyle fit rather than fiscal constraint. Read: more modern. Though not its original condition, at some point, couture became “something that’s supposed to be restrictive and only for special occasions,” Simons said. “I don’t like that. I think that psychologically, emotionally, it can be approached the same way as ready-to-wear: out there for women to enjoy and to wear.…It’s a psychology of how clothes can look in relation to a modern woman and the way she is living her life and experiencing the culture.”

The way women live today is to dress as they please, without the hand of the designer, couturier or otherwise, imposing mandates. To telegraph that notion, Simons wanted to design and detach, so he enlisted four megawattage photographers — Patrick Demarchelier, Paolo Roversi, Terry Richardson and Willy Vanderperre — to photograph the models preshow in front of four different floral walls. (These referenced the setting of Simons’ Dior debut last year.) The pictures were projected during the show. “It’s about the mind-set and the reinterpretations of creations,” he said. “Today, I can do that with these photographers. But for me it’s the same with the women. I am fascinated to see how they will react and reinterpret [the looks].”

Phew! So much to take on, especially given that to make his point, Simons designed the collection in four capsules, focusing on Parisian savoir-faire, American sportiness, Asian architecture and tradition and African freedom of decoration, with a focus on Masai inspiration. On top of it all, Simons took the deliberate and essential step of blurring those formerly crisp lines of reference to the house founder.

As a statement of freedom and creative control of the house — wonderful! As a collection — interesting and provocative, yet disjointed and even dizzying at times, as Simons presented his various motifs not in distinct groups but all mixed in, and shown in a four-sided arrangement that left little time to linger on a given look, to take in its intricacies of design. That’s perhaps one reason why a red cold-shoulder mink stood out as one of the show’s stunners: Its lines and singular surface texture were easy to grasp in those few steps before the model moved from sight. Other looks included la Parisienne tailoring in embroidered men’s wear fabrics; colorful invocations of spiky shibori fabrics, and graphic dresses inspired by tribal paintings and body art. Some were simply beautiful, some complex and beautiful, some a bit overwrought. All pulsed with the fearless modernity with which Simons is leading Dior to its next reality.