The designer’s strong tailoring was on major display, looking sleek and smart in suits and a lean belted coat. 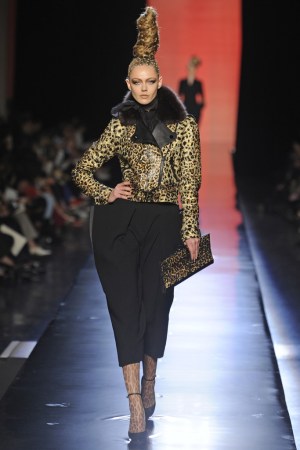 The salons were named for wild cats — Cougar, for one — and the opening music, the theme from “The Pink Panther,” introduced a lineup named for women with an inclination towards danger: Poison Ivy, Catwoman and Mata Hari. While such could have been markers of a mystery-woman camp fest, they were not, at least not completely. Rather, for much of the collection, Jean Paul Gaultier continued with the new (relative) control he imposed on his couture last season.

The designer’s strong tailoring was on major display, looking sleek and smart in suits and a lean belted coat, even as he worked a spotted wildcat motif relentlessly before dropping it halfway through his show.

Sometimes the spots were full-on (sable-collared crystal-on-leather jacket; panther graphic running up the front of an embroidered dress; faux-fur feather jacket), while others came via the extras — a silly circus hat or hose. Within the spot-free zone, there were lovely gowns, including one of multicolored mousseline layers that nodded beautifully to Saint Laurent.

Yet Gaultier, once considered Paris fashion’s delightful enfant terrible and later, amidst rumblings of the impending death of couture, its potential savior, seems stubbornly resistant to pushing the refresh button. He overworked an ergonomic padding motif until it reached Bowie-inspired clown proportions, and overall, the clothes reaped no benefit from arch styling and hands-on-hips modeling.

Just before the bride came a curvaceous nonmodel who worked her shoulders like it’s 1985. Turns out, she was Nabilla Benattia, aka — as one guest explained to an uninitiated coworker — “the French Kim Kardashian.”