Christian Lacroix said in a preview on Monday that he approached the project not as fashion per se, but as if it were theater. 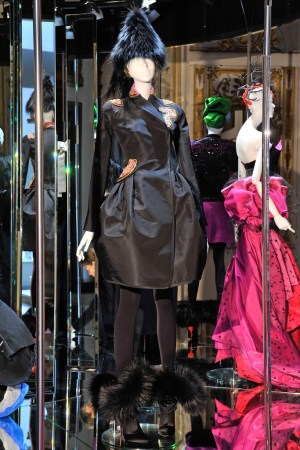 A symphony of chirping birds greeted guests entering the Les Arts Décoratifs installation of Christian Lacroix’s Elsa Schiaparelli homage collection. The birds were perched throughout a bamboo and wooden “cage” under a lush cover of cherry blossoms. In a surrealist nod, these creatures were neither real nor 3-D fakes, but virtual beasts, each residing in its own mobile device. The effect charmed.

That was prelude. Inside, a mirrored carrousel, the base of which reflected the room’s shocking pink carpet, rotated its tony cargo, most of the show’s flamboyantly turned-out mannequins. Lacroix, who now designs for the theater full time, said in a preview on Monday that he approached the project not as fashion per se, but as if it were theater, “as if Elsa Schiaparelli was costumed by Lacroix.”

The designer made and numbered 100 drawings of which 18 were produced. Each look bore some connective tissue linking it either to a specific Schiaparelli collection or to one of her motifs, though Lacroix steered clear of obvious kitsch, i.e., a too-demonstrative show of crustacean (or other surrealist) chic. Rather, he revealed such connections subtly, in a smallish, shiny dark bug positioned on a jacket or by encasing the ears of one mannequin in gold. Several looks referenced Schiaparelli’s circus-themed collection from 1938; one with an enormous peplum made of pockets derived from the collection featured in a March 1940 magazine editorial, “not the easiest spring in France,” Lacroix noted. “She thought she had to make something elegant but convenient, so she did the ‘cash and carry’ collection, so people would be able to carry as much as possible in their pockets.” There were hats by Maison Michel and jewelry by Gripoix, and a gorgeous sari-inspired green gown.

Lacroix is a brilliant couturier who supplied the haute genre with some of its most memorable moments. It’s a pleasure to take in and wonder at his creations. This lineup bore all of his distinctive markings: high drama, lavish detail, impeccable execution and distinctive fantasy element intrinsic to his work. What it lacked was a point, at least one that could be articulated clearly. The installation is available for by-invitation viewing through Wednesday, though not to prospective clients, as there are no plans to produce or sell. Asked what would happen to the clothes post-installation breakdown at the end of the week, Lacroix responded that he didn’t know, though he and a house p.r. representative indicated the possibility of some kind of as-yet-unplanned roving exhibition.

We all know that fashion marketing knows no bounds. From the red carpet to the art circuit to social media, fashion brands jump on any and every opportunity to spread their messages. Certainly couture has long held a marketing function. In the mid-Nineties, as the Western client base eroded (and before the emergence of a whole new, thriving client base), it became standard to view the couture primarily as a marketing tool, one that helped a house push its other products — ready-to-wear, beauty, etc.

Schiaparelli is a product-less brand. It’s a designer-less brand, as the house steadfastly refused to confirm ongoing rumors that Marco Zanini will be appointed in that role. If the homage idea was to heighten excitement for when the house finally has a designer to produce the couture and rtw collections planned for next year (according to a young p.r. woman), how was that supposed to work? How would a collection designed by a major couturier as theatrical tribute rather than statement of modern interpretation rev up the anticipation for Zanini’s (or someone other than Zanini) vision for the intended commercial relaunch? Diego Della Valle, owner of the brand, has suggested Schiaparelli might sponsor more tributes in the future, and not only by designers, but artists and others.

In the meantime, it seems that the clothes were commissioned, designed and made solely to occupy a spot on the couture calendar. The unintended consequence is that by focusing a morning’s attention on the brand, the installation also reminded of its still-dormant status.