“A cabinet of curiosities.” What a splendid starting point for couture, a realm supposedly unique as well as sublime. 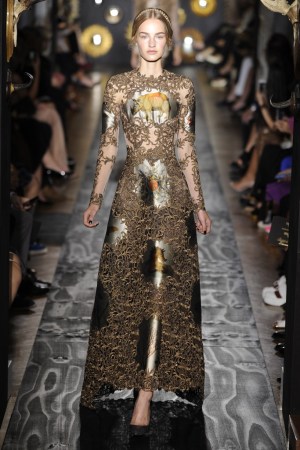 “A cabinet of curiosities.” What a splendid starting point for couture, a realm supposedly unique as well as sublime. The notion worked beautifully for Valentino’s Maria Grazia Chiuri and Pierpaolo Piccioli, whose now-identifiable signature — romantic elegance evocative of Renaissance portraiture — has a pristine core well-suited to surface eccentricity.

“Very interesting pieces, big or strange, we wanted to create something related to [the idea],” Piccioli said during a preview. “It’s like [the models] are dreaming about something mysterious.” The designers set the mood with their first look out: a gown of antiqued golden guipure lace worked to frame a series of pictorial oddities — rhinoceros and what appeared to be hybrid mythological beasts. Different, indeed, and intriguing. Yet this did not lead to a wildlife fest. Rather, the designers let their curiosity run to other areas of the natural world and beyond. One gown came in an elaborate shell-patterned brocade while a coral motif showed up variously as black-and-silver brocade and a number of intricate embroideries. In the midst, there was one mistake. The show closed with a full-skirted gown in a demonstrative print of eclectic mien — rhino, snake, insects, sea creatures — seamed in the back with an un-haute lack of precision. That was, however, a rare misstep made up for elsewhere in perfectly engineered lacework and embroideries.

Curiosity is not limited to artful expression; throughout this couture season, designers displayed an increased attention to daywear. Chiuri and Piccioli’s was breathtaking. They worked in substantial, sometimes mannish fabrics tempered with a feminine flourish — a tweed coat and skirt with a whisper-delicate lace blouse; a cashmere cape cut into a graphic lace. The clothes looked utterly modern while recalling a time when chic elegance was considered a fashion virtue. “We wanted to say that couture is alive,” Piccioli said, “to give a perception of couture which is of the moment for modern women, that they can wear couture in their own private life and not just for the red carpet.” Hear, hear.