The designer's fall couture collection impressed, above all, with its fairylike lightness. 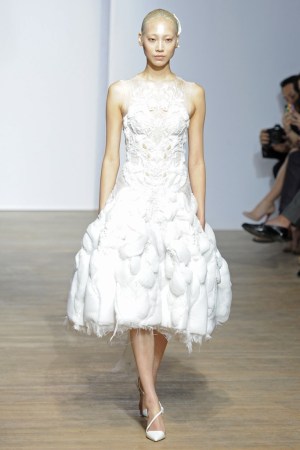 Yiqing Yin’s fall couture collection impressed, above all, with its fairylike lightness. Models who morphed into elfin creatures were trailed by a cloud of ultrathin, iridescent organza behind them; wads of cotton gauze made a white petticoat dress appear as light as a snowflake. A reversible damask fabric — in various shades of blue on one side and shimmery gold on the other — added a graceful touch to a voluminous, high-collared gown and a bountifully draped mini version of the same look, which engulfed the model’s body like an animated ocean wave. The strong lineup, with its experimental yet wearable designs and high level of craftsmanship, underscored why Yin is a designer to watch.