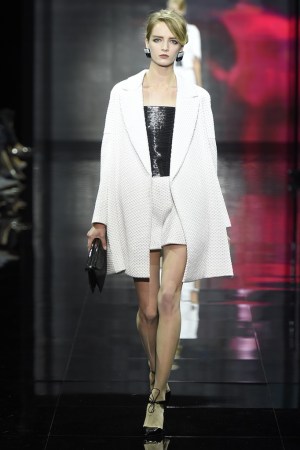 A big black lacquer box opened at the beginning of the Armani Privé show, releasing a red glow and Giorgio Armani’s two big ideas for fall couture: daywear with swing, and subdued eveningwear with added froth.

This was a brisk and focused show, stripped of some, though not all, of the runway trickery that can obscure the designer’s mostly clean and sculptural designs.

Armani is enjoying something of a renaissance in men’s wear, and his tailoring for women had a certain allure. He built cape effects into many of his jackets, most of them cropped. This trapeze line was exaggerated further in swingy overcoats in textured piqué fabrics. Frisky shorts finished off most of the looks, though the pencil skirts and lean pants seemed a better foil to all that volume on top.

Lacquer shades of red and black dominated, and origami shapes patched onto loose, kimono-sleeve coats had a graphic oomph. Exploded animal prints were puzzling and did not benefit from the addition of red squiggles and dots.

And then came the froth — of a moody ilk more ponderous than lighthearted. What looked like fur chubbies were actually overcoats composed of veil net, fluffed into pot-scrubber proportions. Gathered tulle flounces also gave dramatic volume to a number of gowns.

Although one normally associates a finale of red dresses with another famous Italian brand, some of these are sure to have a celebrity outing soon. Leading the way was Armani stalwart Sophia Loren, the sparkling lady in red who stood out amidst Jared Leto, Kate Hudson and Pink in the front row.