The show featured eight distinct sections, some seemingly unrelated but in fact linked by Simons’ manipulation of past concepts into modern chic. 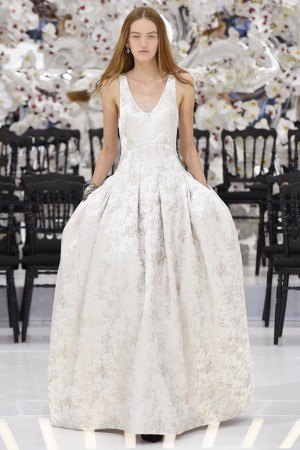 If couture venues are chosen to suit the personality of the designer, it makes sense that Dior shows at the Rodin Museum. While Raf Simons doesn’t spend his days in contemplative inertia plopped on a rock with his chin on his hand, he is one of fashion’s great thinkers. His work springs from intense thought, research and reason behind each motif, each silhouette, each embellishment. His goal is not only to turn out exquisite clothes enticing to Dior’s tony global clientele, but to do so within a framework that challenges and seeks to advance current notions of modernity — within the ethos of Dior.

The collection Simons showed on Monday was fascinating in its foundation, and often beautifully rendered. “This collection is very historically inspired,” Simons said in a preview backstage. “It felt like a challenge to look further back in history and see how I could modernize certain aesthetics. That is my constant drive, to make it younger and make it relevant to women in their lives today. Always, to be modern.” So, too, was the mesmerizing set: a pristine, round pavilion, its mirrored walls covered in thousands of densely packed white orchids.

The show featured eight distinct sections, some seemingly unrelated but in fact linked by Simons’ manipulation of past concepts into modern chic. The first inspiration: constricting 18th-century courtly costume that corseted women and fancified men. Simons interpreted the Robe à la Française, a structured bodice with massive side-to-side volume in the skirt, with outward subtlety — from an old pretty dress sprung a series of new pretty dresses. Yet underneath, he shunned that critical foundation of both the 18th century and current couture, the corset. These charmed in white, silver, barely there green and blue jacquards, their exquisite embroideries applied with smart restraint.

As for the mannish frock coats, Simons turned them casual, even removing the sleeves from a green astrakhan version. In between, he presented the collection’s wildest juxtaposition, integrating elements of astronauts’ flight suits — specifically utilitarian zippers — into dresses before switching gears and applying traditional embroideries onto full-on flight suits. These were inherently fun — haute NASA, come on! — even if Simons tried his best to hide the fact in the seriousness of his overall message.

He offered an ode to the last century’s early fashion liberationist, the flapper, her lines free and easy, and her embroideries intricate but not at all coy.

Simons delivered a dose of sporty daytime drama with bold floor-sweeping coats that derived from Edwardian days yet that rang a bell of free-to-be Sixties rock. And in “Collar meets Bar,” he continued to reinvent the house standard. He closed with deftly embroidered silk dresses that referenced the show’s structured openers, their volume now comfortably deflated via gently released pleats.