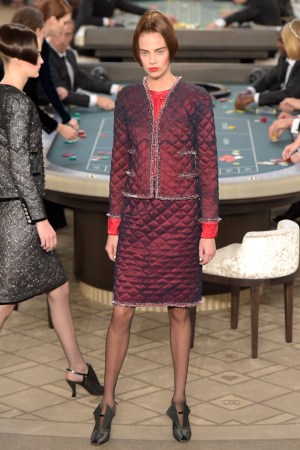 Karl Lagerfeld probably didn’t intend his Chanel couture show as a statement on some universal fascinations of the greater fashion industry, but one could definitely read it that way. Within his Cercle Privé casino installed (with ample air conditioning, thank you, M. Wertheimer) inside the soaring Grand Palais, he addressed celebrity obsession, the tension between technology and tradition and high-stakes risk. He did so while presenting two distinct collections in a single spectacular event, one his haute couture, and the other, the house’s high jewelry collection, a full re-issue of “Bijoux de Diamants” from 1932, the only fine jewelry ever created by Coco Chanel.

Lagerfeld’s casino was ever so chic, its grand, modern-deco look featuring a raised perimeter around a center floor anchored by roulette and blackjack tables. Just before the show started, glamorous gamblers, each in a look made just for her and aglow in glittering diamonds, made their way to the central tables — Kristen Stewart, Rita Ora, Geraldine Chaplin, Vanessa Paradis and her daughter Lily-Rose Depp, Lara Stone, Stella Tennant and on through a lineup of the chic and fabulous until finally, Julianne Moore arrived and took a pearl velvet seat at a table.

They played the wheel and numbers convincingly (in fact, they’d all had a crash course in gambling just the day before) in their own glossy, high-profile bubble, seemingly oblivious to the communal neck-craning of the surrounding audience, all for a better view — and to the show itself.

It was a hard one to ignore. First looks out: 10 of the most classic iterations of the Chanel suit — iconic, spare jackets over trim skirts. Only these weren’t tweed but some kind of quilted mesh. And they were made not in that bastion of skill and history that is the Chanel atelier on Rue Cambon but in Belgium — sprung from a 3-D printer. “The interest is that we take the most iconic jackets from the 20th century, and make it in something you couldn’t even imagine then for the 21st century,” Lagerfeld said during a preview. Asked how he syncs the press-a-button method of production with the hand tradition of couture, Lagerfeld noted the expert measurements required, the added-in silk linings, and various finishings. “It’s a mix of the human hand and the machine,” he said.

Having stated visually what everyone in the room already knew — that he’s obsessed with modernity, constantly thinking of the new and the next — Lagerfeld reverted to more conventional couture methods for the rest of the collection, an interesting fusion of control and exuberance. He used a military flourish, the epaulet, to impose unity on very diverse silhouettes. Jackets ranged from the classic house shape to cropped boxy styles to hip-length versions with dropped lapels and loose, flyaway backs. And, legwear folks take note, he showed it all with sheer black hose atop winged shoes that looked like paper airplanes.

Evening was all as varied with a subtle current of discretion, no flights of fancy too extreme for clients — on one hand, a barely-there tiered metallic slip and on the other, a lace-and-organza dress with a full, stiffened skirt. The tiers proved something of a motif, lovely and feminine, though even some of the most delicate dresses got epaulets. A good bet: Clients will be rolling sevens.