“A girl walking in the snow in mountainous terrain,” is how feather specialist Serkan Cura summarized his eccentric yet likable fall couture effort. 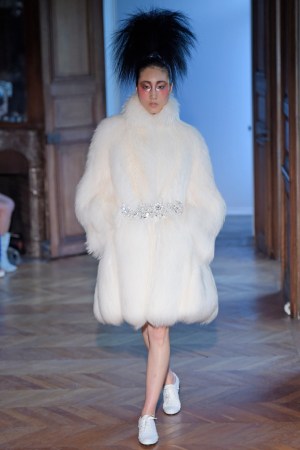 “A girl walking in the snow in mountainous terrain,” is how feather specialist Serkan Cura summarized his eccentric yet likable fall couture effort.

Kept sober in a mostly black-and-white palette, the looks fascinated with their form and texture, marrying fur with a flurry of feathers and, occasionally, Swarovski crystals. The designer produced a series of cocooning outerwear pieces, including an enveloping A-line coat with sewn-in collar, which was made of ivory-colored alpaca fur and matching feathers. Another number suggested a voluminous feather hoodie, while it was actually a bodysuit concealed by its copious structure.

Elsewhere, Cura wrapped his exotic snowbirds in a white ball of feathers or had them peek from in between black ostrich plumes that were arranged like the spiky coat of a porcupine from some Far Eastern fable, given its outlandish, chimerical appearance.

The designer consistently focused on the upper body, matching his spirited creations with simple, high-waist leather pants or bare legs.

While it would take courage to pull off some of the more outré silhouettes, Cura still provided enough wiggle room for a delightfully different street-couture approach.