IsSixWeeksAfterFashionWeek = false
By Bridget Foley and Luisa Zargani on July 9, 2015 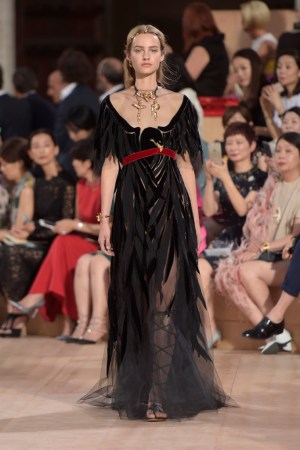 “It’s kind of a new Renaissance.”

Pierpaolo Piccioli was speaking of Italy today, but he could have made the same observation about the house of Valentino itself. He and his co-creative director Maria Grazia Chiuri have thrust Valentino into a renaissance of its own, making it one of the hottest, most watched brands in all of fashion. They’ve done so with an against-the-grain aesthetic that unapologetically mines old-world beauty and laces it with antithetical elements to rich, disarming effect. The couture collection they showed in Rome’s Piazza Mignanelli, home to the Valentino headquarters and new store, brought new depth to their range and reputation. It was exquisite.

The designers wanted to share with guests their vision of their beloved native city, which they find endlessly inspirational. “Everything is getting so global, it’s very important sometimes to be very local to talk about your identity,” Piccioli said.

Local but never parochial. There’s worldliness to the Valentino aesthetic, not easy to achieve, particularly given the romance factor. “Rome is the place where we bring a lot of inspiration,” Chiuri said, adding that even if you’re Roman, “you can open a door or you can go inside in a corner and find something you’ve never made in your life.”

The two spoke during a preview earlier in the week in Paris, where they went to do fittings because of the models’ schedules.

Piccioli called Rome a very layered city: “You feel the history, the cinema, the church.” Indeed, the layering of disparate elements keeps their very romantic work from turning sweet. Here, they worked a dark mood, literally — it was mostly black — and figuratively. There were monastic and pagan elements and moments of utter sobriety countered by sensual expression. The craft on view was masterful, some looks intricate workings of tulle, point d’esprit and lace, others vividly representational — a gown appliquéd with a giant eagle and feathered at the hem; a cape with arched insets resembling the Coliseum over a layered, sheer dress with an image of a fierce lion.

Color came in the deep reds and greens of Roman flooring and tiles, and in vibrant gold, including a beauty of a warrior look in embellished gold leather strips on black tulle. Clear references to the Middle Ages and the toga culture of the ancients — gladiator sandals and Alessandro Gaggio’s sculpted head wreaths and jewelry featuring wolves, griffins, bees and other animalia symbols — heightened the almost mythic aura.

For all the visual eloquence, preshow there was a tinge of AbFab at the sight of so many women dressed in their romantic, often covered-up Valentino best, some of it couture, while sweltering in near triple-digit-heat in an open-air square. Their embroideries, tapestries, laces and elegant flou looked far more at home with their surroundings once the festivities moved to the magical Villa Aurelia perched on Gianicolo Hill overlooking the city.

There, guests had cocktails in the gravel courtyard, its center square of grass adorned with potted lemon trees. Dinner was served under a dense canopy of umbrella pines just beyond, at tables set with mismatched floral plates and hundreds of glistening candles.

“So beautiful” was the comment perhaps most widely overheard, referencing both the villa backdrop and the earlier show. Guests were in the mood to unwind and chat over cocktails. “These are clothes made for wearing, they make you feel like you want to wear them,” said fashion connoisseur Tilda Swinton. “Even when [Chiuri and Piccioli] are working with weighty fabrics, there is a certain fluidity and the clothes are so light.” Nearby was director Luca Guadagnino, with whom Swinton worked on “I Am Love.” Their new film together, “A Bigger Splash,” will be released at the end of the year. Asked about her role, the actress smiled cryptically and said: “I play a rock star at a certain point in her life.”

Gwyneth Paltrow said she was just focusing on her Web site Goop and that Rome could make for a good source of inspiration given that “it’s about everything, life, food…”

Earlier, at the show, Alber Elbaz showed his support to Chiuri and Piccioli. “The days of hating each other are over. We are more a family than an industry,” said Elbaz. “I like and respect (Chiuri and Piccioli) as people, there is always a person (behind a brand).”
Victor Alfaro, a longtime friend of Chiuri’s from their GFT days, offered his agnostic take on a Vatican tour on Wednesday with Chiuri and members of her family. They took in the art, walked through gardens not typically open to the public and ended up in the Sistine Chapel. “There were eight of us. And the guy says, ‘sit by yourselves for 15 minutes,’ and you’re looking at Michelangelos, Raphaels. You feel like you were levitating in beauty, in something really special. I came out of there almost cleansed, visually, completely satisfied. It was incredible.”

Carla and Anna Fendi, Silvia Venturini Fendi and Delfina Delettrez Fendi also attended. So did Harry and Peter Brant, Bianca Brandolini d’Adda, Alba Rohrwacher and Mika. Ben Stiller and Owen Wilson made a last-minute, late-night appearance after dinner. The two actors had been filming “Zoolander 2” in the city and arrived long after midnight as friends of Chiuri and Piccioli following their surprise walk on Valentino’s runway in March.

Wearing an off-white suit and leopard-print pumps, Valentino Garavani, sitting near longtime partner Giancarlo Giammetti, also in white, recalled his own days showing in Piazza Mignanelli. “It’s an incredible emotion. I remember when I would show 180, 190 dresses and 400 pairs of shoes,” he said, waving his hands in the air. “Those collections would go on and on,” said the couturier, who was gearing up to sail off to Spain on his holiday.

Giammetti praised Chiuri and Piccioli. “I was the first to stand up,” he said, referring to the full-house standing ovation. “Tonight was proof that beauty is still what people love.”