The designer has a knack for integrating complex artisanal techniques while making his couture pieces look effortless. 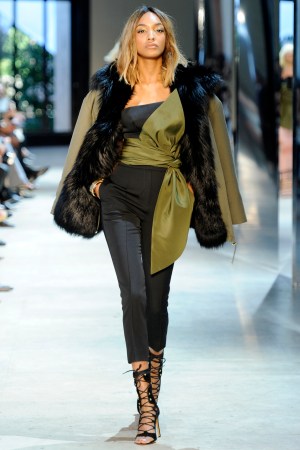 But his sporty-utilitarian looks in khaki won out. There was something in the styling and attitude that evoked editor and stylist Carine Roitfeld, who was seated front row. Out came safari dresses bound with belts, ultra-brief bandage minis and leather jumpsuits, with outerwear ranging from a glossy dark chocolate patent leather trench to parkas lined with fur. It was all predictably sassy and beautifully produced, especially Vauthier’s signature precision tailoring. Still, some of the looks felt a little too pedestrian for the couture stage.