Yacine Aouadi was inspired by a visit to the Mosque-Cathedral of Córdoba. 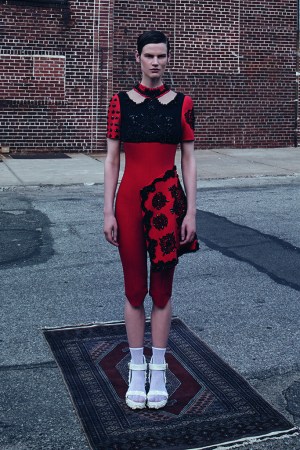 A visit to the Mosque-Cathedral of Córdoba inspired Yacine Aouadi to explore themes based on Andalusia’s Moorish and ecumenical heritage. The Balmain alumnus said he was seeking to overturn cultural clichés in his third, colorful collection (he is showing as a guest on the Paris couture calendar). Whether he achieved that is open to debate, but what he did do was show off his ability to play creatively with embellishment and use materials to interesting effect, proving his place as one of couture’s rising talents.

The Hispanic references were most evident in a red broadcloth bodysuit, complete with an integrated torero’s muleta embroidered with black gemstones. But they were more successful when less literal — as on the scalloped edges of a black strapless wool gown, lined in emerald satin, which at the back revealed a boned corset adorned with small white leather flowers; or on an emerald silk shorts suit and reverse tailcoat with a Renaissance-style bodice embroidered by Lesage.

Technically, the details throughout the collection were fascinating — as in the use of platinum-colored sequins heated until they curled into tiny tubes, then embroidered to create an astrakhan effect, or in the embossed motifs created by burning the reverse of indigo panné velvet.