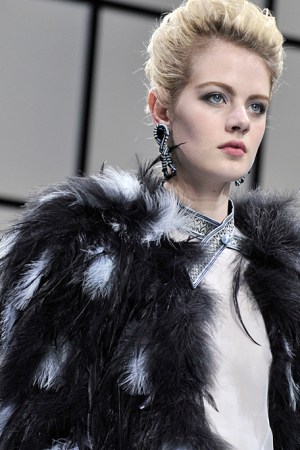 For fall, Armani put the brakes on that forced youth movement, returning to a zone better suited to his aesthetic and his couture clients. The collection he showed was all about sophisticated chic — a surprisingly reserved take on the genre, as if sending the message that he wants to take a breather from externally imposed frenzy to focus on smart, wearable clothes.

Most of the collection was reed-thin with a current of sly raciness, particularly by day. A smart approach in theory, though satiny stylized houndstooth-print pants, while not bloomers, have limited appeal. These came in combinations of black with the iciest shades of blue and pink, and were worn with slim, often collarless peaked-shoulder jackets. The patterns — other geometrics as well as the  houndstooth — proved a major theme, transferred to A-line coats as well as jackets worn with the dhoti pants Armani just can’t say no to for too long. Even given the volume of the pants, the takeaway was of a linear silhouette.

That line continued into evening with several alluring black velvet siren gowns, including one stunner, cut dangerously low in back and edged in crystals. Once in a while, Armani gave in to the grand gesture, some that worked (the collection’s lone ballgown, a velvet gem with tiered, embroidered skirt; a big fluff of blue and black feathers turned into a coat) and some that didn’t (silly pocket pasties on the sheer bodice of a mermaid gown). But overall, this was a subdued collection, embellishments included. When he opted for sparkle, Armani did so with geometric precision: for example, a pair of black velvet gowns, their bodices in grids of crystals, one blue, one pink, for the look of a jeweled T-shirt and skirt. Quietly lovely.