For her fall Atelier Versace collection, Donatella Versace delivered a look of powerful glamour at once unjust and experimental. 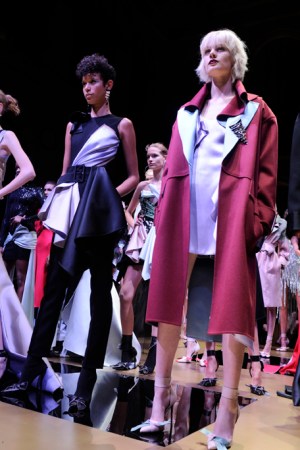 Sometimes, creativity spikes. That seems to be what’s going on chez Versace these days, where, on Sunday evening, Donna Versace showed her third stellar collection since February, following her women’s and men’s ready-to-wear gems with a powerful couture collection for Atelier Versace.

Hand in hand with creativity, something else is flowering under Donatella Versace’s watch: problem-solving. Versace often speaks about designing to the power of women, of making clothes that help women project their innate strength. There’s no reason why couture shouldn’t be a part of the equation. But the genre carries with it — or we project onto it — an aura of preciousness. For fall, Versace gave preciousness the heave-ho in a show bookended with fabulous personifications of the goal — Karen Elson opened and Carolyn Murphy closed. Both looked glorious.

Elson’s exit suggested from the start that this would be neither an audacious isn’t-sex-fun frolic nor a glamorama of artful, diaphanous draped goddesses. She wore a coat in pink cashmere faced with shimmery blue satin, the sweet girliness implicit in that combination shattered by its authoritative silhouette that fell with deliberately seductive intent off of one shoulder, revealing an asymmetrically cut wine-colored bustier. Another coat, in russet faced in blue with a deep, trapeze trench back, topped a little nothing of a slipdress. Such coats and jackets were the stars of the show, in part because of the element of surprise. They looked so — for lack of a better word — functional.

Yet the collection’s main thrust was evening and here, too, Versace dared. She incorporated a number of her favorite motifs — asymmetry, draping, fabric mixes — but she did so via intense experimentation. Determined to deliver evening looks that were both decorative and unfussy, she worked with structured fabrics, and she charged the atelier with creating visual flourish via the cuts, as opposed to elaborate embroideries. Case in point: a gown with a tiered ruffled neckline that extended on one side into half of a peplum. Otherwise, she manipulated various swaths of pastel fabrics to wrap around or affix to black body dresses, both short and long. And she added slim pants under a full-skirted open-front hostess gown. Yes, a few looks rang tricky, and many would surely get trashed on social media were they to hit the televised red carpet. But such is the nature of experimentation.  Another plus, this one a silver lining as iridescent as the lining of Elson’s coat: it’s the price of not being mundane.