The capsule collection had a bit of a pimp vibe going on with the prints, velvets and a Seventies palette. 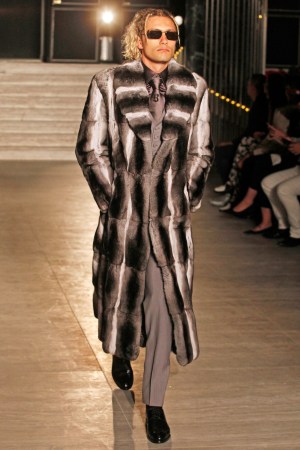 Brioni’s new creative director Justin O’Shea, who has no design experience, opted to show his first effort for the house during Paris couture week. Among the motley mix who headed to the cavernous gray travertine-marble basement of the brand’s new Rue Saint Honoré flagship, due to open next week, were Alexa Chung, clad in a bespoke redingote-style velvet jacket and low-rise tuxedo pants, and Demi Moore, dressed in a bespoke pinstripe suit and tie — accessorized with black stilettos. They carried on a house tradition of bespoke women’s wear, according to a representative.

Opening with a fur coat, the capsule collection had a bit of a pimp vibe going on with the prints, velvets and a Seventies palette. Silhouettes moved between a longer jacket with wide lapels and slighter flared pants for women and a fitted suit with cigarette trousers for the men, that were tinged with rock ‘n’ roll. A three-piece suit in rust velvet was among standouts. There were Western details on the backs of jackets, pearl buttons and glinting red metallic pinstripes. Accessories included shrunken briefcases and white leather boots. The collection hits Brioni’s e-commerce site and flagships today as well as selected retailers worldwide.