For his fall couture collection for Chanel, Karl Lagerfeld made news with pants — and by celebrating the seamstresses of his atelier. 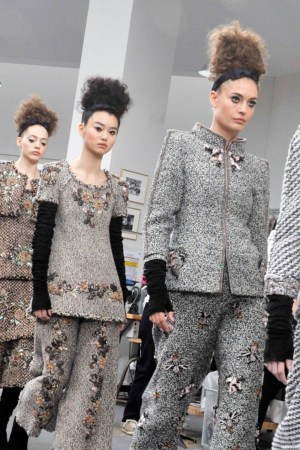 It played as something of a valedictory. Karl Lagerfeld, fashion’s most storied purveyor of luxe, wearable chic and genius pioneer of the fashion show as global marketing jackpot, took the occasion of his fall couture collection to celebrate the people who make it happen — the atelier. So, for his set, no magical undersea world nor garden of giant, mechanical paper plants. No Chanel brasserie nor hedonistically stocked supermarket. Instead, Lagerfeld commissioned the temporary transfer of Chanel’s couture atelier to the Grand Palais. There, around the perimeter of the circle beneath the glorious dome, Chanel’s premières and 78 seamstresses toiled at blond-wood work stations. They sewed, they measured, they outlined, they ironed. One woman prepared a Stockman dress form for a client (the lady — not a sample size).

“People like the idea that they could see the show for once,” Lagerfeld said during a preview. “Plus, I thought it was a modern idea that they should participate, so that people pay attention to them because the craftsmanship is so unbelievable. I think they should be shown, too.”

While most never get to see the work they’ve created in the context of the fashion show, they kept working as the audience filed in and even as the models filed past. The collection was exactly what couture should be — part forward-motion fashion, part sure-fire client favorites, beautifully rendered. The overarching unifier: a strong, clean shoulder line created by the genius artisans of the ateliers, sometimes with a single sharp angle, sometimes with a mitered corner but no padding.

The big fashion news: pants — actually, jumpsuits — cut lean through the body and widening through the leg to the cropped hem in a precision A-shape, under lean, longish jackets. It’s the new, ultra-alluring Chanel suit.

Another theme: Cutaway jackets and dresses. Sometimes the length variant was created by a slight, backward-tilting ellipsis, revealing a hint of skirt in front; at others, a tunic descending into a deep point in back exposed a decorated facing. Another point of interest: bold, unfussy embroideries, their shine tempered by feathers and matte materials. Of course, sometimes a woman wants to dazzle. Elaborate garnet- or emerald-hued crystal embroideries on white dresses will light up the night.

As is typical, Lagerfeld held two shows. When taking his end-of-show runway lap at the end of the first (he’s never embraced the wave-and-run school of acknowledging his guests), Lagerfeld stopped at the station of tailleur première Mme. Josette, chatted for a moment and then beckoned her to take the runway walk with him. After the second show, he insisted that all of the premières — Mmes. Cécile, Jacqueline and Olivia in addition to Josette — also take the stroll. A rare heart-on-the-sleeve moment, and a reminder that couture is about more than a rich woman in a six-figure dress.