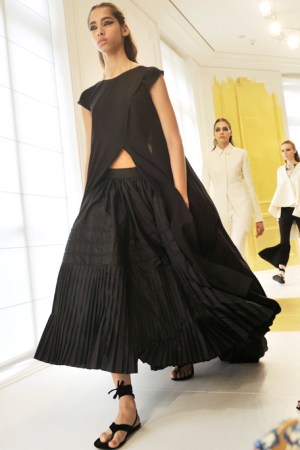 What’s better than a graceful exit? How about a gracefully spectacular exit? If persistent rumors prove true and Valentino’s Maria Grazia Chiuri is headed to Dior, then interim designers Lucie Meier and Serge Ruffieux have designed their last collection for the house. They’ll leave with one impressive portfolio in tow.

Their fall couture collection was gorgeous in a way too rare from younger couture types, one that makes Meier and Ruffieux kindred couturier spirits with Bouchra Jarrar. Visually, the clothes look nothing alike — zero. Jarrar favors a reed thin, masculine line; this was all about volume, billowing fabrics, movement and, yes, tailoring — an honest-to-God New Look derivative that managed to say something new. What links the two is end use: These clothes and Jarrar’s couture (on hiatus this season due to her hire at Lanvin) look as if they’d appeal to women who live and function the way Meier and Jarrar do — in the real world, where life’s not just a party, finances permitting. This is couture with all preciousness and retro yearning siphoned out, replaced by currency, a refined casual attitude and great style.

The collection surprised, in part because the designers’ previous work for the house proved unremarkable. Perhaps it took a while to feel comfortable in the limelight, or maybe their partnership needed time to coalesce. In an unusual arrangement under Simons’ tenure, the two headed different seasons in the design studio.

The duo showed in the house couture salons on the Avenue Montaigne, the white walls painted with big, random blocks of gold. Clue! A lineup in all black and white, with shots of gold. The show notes cited the Bar jacket as “the principal inspiration,” and referenced a lighter, contemporary take on the New Look’s volumes. Touché. Fullness came in various forms: skirt wafting from under constructed jacket; cutaway trapeze popover over pants; diaphanous tunic over skirt. While the mood was effortless, the cuts were anything but — jackets intricately constructed, some with tightly ruched sleeves; skirts pleated, paneled, tucked and otherwise de— tailed. The gold revealed itself variously with relative flamboyance, in embroidery on a jacket, or utter discretion, in a fine line of sequins edging the hem of a long skirt.

During a preview, the designers referenced several artists — Pablo Picasso, César Baldaccini, François-Xavier Lalanne and Claude Lalanne — as well as Marc Bohan, Dior’s longest-tenured designer, for his discreet good taste. One onlooker’s Bohan is another’s Yohji Yamamoto. One felt a twinge of his influence in the volumes and unfussy romance, grounded, literally, in flat sandals.

What’s next for Meier and Ruffieux? Word has it that the top LVMH brass would like to keep them in the group. Based on this effort, why wouldn’t they?