Karl Lagerfeld delivered a moment of wonder on Thursday night in his much-anticipated Roman extravaganza for Fendi, stellar on multiple levels. 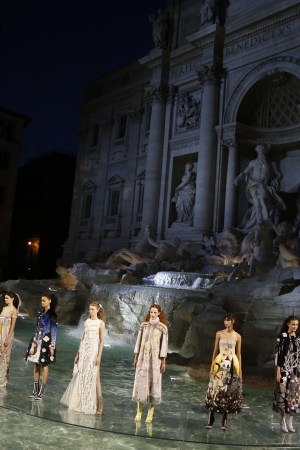 If you genuinely love fashion, you’re never too jaded to give in to rare moments of wonder that resonate with something extraordinary, moments that provide antidote to all of the (often justified) whining we do, moments that put all the mediocrity in perspective.

Karl Lagerfeld delivered one such moment on Thursday night in his much-anticipated Roman extravaganza for Fendi, stellar on multiple levels — beauty, storytelling, craft. It was anticipated enough that, along with Kate Hudson, Bella Thorne and former Fendi employees and newsmakers Maria Grazia Chiuri and Pierpaolo Piccioli showed up together to take it all in.

The show celebrated two events — the 90th anniversary of the house where, in the era of challenged luxury, business is rolling along nicely, and the restoration of the Trevi Fountain, thanks to Fendi’s philanthropic largesse. The city of Rome showed its appreciation by sanctioning the show that involved some serious street closures and the installation of a Plexiglass runway over the shallow, coin-speckled pool, allowing Lagerfeld’s princesses to glide across the water as if by magic.

Magical indeed. Though Lagerfeld has turned out his share of chic frou, particularly at Chanel, he typically keeps his inner romantic well in check. “It’s not on public display,” he said, during a preshow conversation. (That is, if you don’t consider his mesmerizing illustrations, including one of the fountain, that graced his show invitation.)

In fact, Lagerfeld was inspired by an illustrator, Kay Nielson, whose early-20th-century children’s book work brought visual sophistication to otherwordly yarns, filled with princesses and witches and comings and goings into the forest deep. Lagerfeld ran with the idea, building the collections around representational graphics — the aforementioned characters, forest themes at different times of day and night, endless flora and fauna, a glistening castle — all translated into fur.

Enter the Fendi atelier, the capabilities of which astonish. As stunning as these clothes looked while gliding atop the water, no fashion show courage could do justice to the technique and craft. Fur was cut intarsia, handpainted, sheared to a pile of velvet, and shaved into flamboyant 3-D flowers. One fur-laced dress featured 5,000 hand-cut holes; a coat depicting a detailed forest scene, made from tiny individual pieces of mink, took 1,200 hours to construct. Each piece was a masterpiece of imagination and execution. Together, they made for one of those rare fashion wonders. Or as Lagerfeld said, referring to a famed scene in “La Dolce Vita,” “I think this the most interesting happening at the fountain since Anita Ekberg.”