If couture is about possibilities, Gilles Mendel showed plenty, including a range of off-the-shoulder furs and beaded columns in Klimt colors. 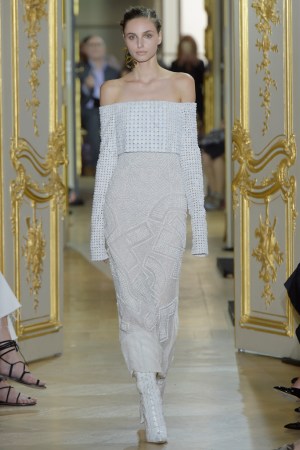 First thought during Gilles Mendel’s couture debut: How practical is an off-the-shoulder fur? Isn’t that the part of the body, however beautiful, that a woman covers at the first hint of chill?

But by the end of the display, when an off-the-shoulder cape drifted by in a Russian sable that had been infused with 24-karat gold, a different question came to mind: How does he get it to float there so effortlessly?

Mendel comes from a long line of furriers, and backstage he cited a wish to pay tribute to his father, who taught him everything, and his New York atelier, clearly capable of marvels. (The show notes mentioned an “invisible corset” with each off-the-shoulder style.) At times, there was almost a little too much artisanal razzle-dazzle. Consider a floor-length broadtail coat carved into columns held together by tiny rows of 24-karat-filled buttons, giving the impression of a studded fur. Instead, the wearer can open windows onto shoulders and forearms, or slits to show off the beaded column underneath.

But if couture is about possibilities, Mendel showed plenty, opening his show with a white off-the-shoulder column with tiny tiles of mink mounted on chiffon, quickly followed by a trenchcoat of broadtail hand cut to resemble an intricate mesh. The furs were opulent, particularly a white chinchilla with coiling sleeves and the same button trick, here in satin. Evening columns came densely beaded in Klimt colors, and occasionally overcharged with tiered, multicolored swags of pleating.

Mendel intends the couture showcase to be a permanent rendezvous, in addition to his ready-to-wear shows in New York, the next scheduled for September.