The designer was in a more contemplative mood than usual, with a collection inspired by a stroll through a forest in Japan. 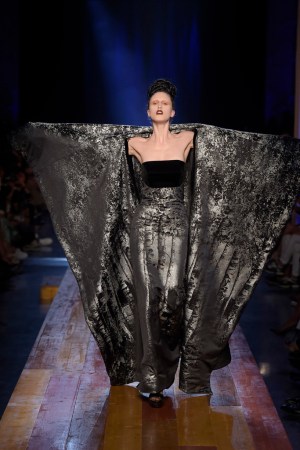 You can always rely on Jean Paul Gaultier for a healthy dose of joie de vivre. This season found the 64-year-old designer in a more contemplative mood than usual, with a collection inspired by a stroll through a forest in Japan. “It really was like a revelation. I saw magnificent woods, so I made wood prints and worked them in planks, like marquetry,” Gaultier said backstage. “It’s all about Zen and nature and the environment.”

It turns out one man’s Zen is another man’s fireworks. Gaultier kicked off with a literal take on the theme, in the form of wood prints that mirrored the gleaming floorboards lining the runway; they appeared on a variety of looks, including a satin catsuit, a funnel-necked trench and a floaty evening gown with a graphic pattern over the chest. Then, as a meditation CD played on the soundtrack, the designer unleashed the full arsenal of his couture atelier’s skills to riff on textures like lichen and bark. An image of a birch forest was etched out in jet beads on pants, and appeared again on the lamé jacquard lining of a dramatic cape coat, which Anna Cleveland worked to the hilt. Sequins and Swarovski crystals sparkled on evening gowns and bustier tops attached to long panels in the front and back. Some models wore snug caps with a wide circular brim that framed the face in halos of iridescent feathers or fur.

Gaultier employed a rich palette of autumn leaf colors, which appeared to explode all at once on a painterly satin dress printed with a moody forest landscape. Fur coats came in dense patchworks of fox, astrakhan, beaver, coyote and lamb (hairstylist Odile Gilbert matched a russet astrakhan biker jacket with a head of tight ringlets in a similar shade). “The workmanship is very, very, very couture,” Gaultier emphasized. “It can’t be copied.”

It may have been all about Zen. If the aim was to free the audience from material want, though, Gaultier did not succeed. Them woods contained plenty of treasure.