John Galliano showed a collection that cross-referenced skateboard culture with the French Revolution to masterful effect. 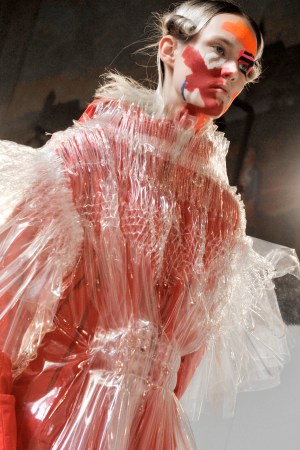 “Fearless, reckless but technically perfect.” John Galliano made that observation about high-skill skateboarders. In his fashion worldview, those traits are essential, and for fall, he integrated them with elements gleaned from other points of fascination, the French Revolution for one.

Not that such far-flung reference material matters if the end result is a dud, Galliano noted during a moment of pre-show calm at the Hotel des Invalides, in a second-floor salon with a glorious view of the great dome across the courtyard. “At the end of the day, it’s about making beautiful clothes,” he stressed.

But at day’s end, some paths to that goal are more complicated, more thoughtful and more nuanced than others. Galliano’s passions are stirred equally by a garment’s clinical makeup, deconstructed and examined; its historical provenance and its ultimate visual impact. He asserts that the couturier’s role is to study and develop new volumes and proportions — “fashion is about volume” — or find fresh expression in familiar volumes, whether derived from skateboarders or that wonderfully outré heyday of Napoleon and Josephine. His fall Maison Margiela Artisanal collection was informed as well by the recent volatility of world events, drawing him to consider “emblems of security” — Savile Row tweeds, Lobb shoes — “shall we call them comforters?” he queried. And there’s more: Thomas Gainsborough, late-18th-century satirical illustrator James Gillray and the British artist known as Bob and Roberta Smith.

Galliano intertwined and subverted it all into a collection of beauty and intrigue, yet with an approachability (for lack of a better word) that belied its intricacy. The point: retain couture’s chic, its exclusivity, its experimental mojo, but lose the preciousness, a direction he attributed to being inspired by “my Instagram family that I follow.”

Thus, complicated tailoring looked the opposite of pompous, with shades-of-military jackets and coats dressed down via a street attitude, some worn inverted, upside-down, draped and tied, sleeves but dangling appendages, which Galliano dubbed “the flip side.” He may have appropriated the term from the skate world, but he’s long used such treatments, sometimes to his detriment, spurring interrogations of “where are the real clothes?” Answer: right here. Exhibits A and B: two photos of the same vibrant coat.

Another stunner was an oversize caution-yellow Mackintosh worn over a striped bed sheet of a dress with an endless lace-appliquéd train that was flipped over the shoulder in a gigantic arc. Similarly, diaphanous dresses that should have radiated gentleness didn’t. A plissé Empire gown toughened up with sleeves made from knotted-up motocross pants, while a little nothing of a dress — a barely there piece of beige chiffon — flaunted a pair of giant intarsia cherubs. Yet fashioned in fiery red lace, there was a fine line between innocent cherub and mischievous baby devil.

But then, the devil is in the details. So, too, are the wonder of real fashion, and the artistry — a word not chosen lightly.