The 29-year-old Beirut-based designeri presented at the Plaza Athénée, a key stomping ground for his clients. 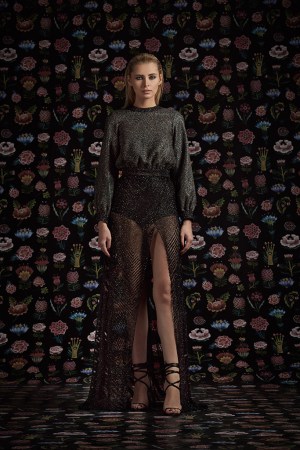 “Couture doesn’t have to be classic. It has to be couture in terms of the savoir faire and level of craftsmanship, but you don’t have to look like a princess, or if you do it should be in a modern way,” said 29-year-old Beirut-based couturier Rami Kadi who presented his collection at the Plaza Athénée, a key stomping ground for his target client. Since launching five seasons ago, Kadi has built a strong following in the Middle East with growing interest from Russia and Asia (Indian actress Aishwarya Rai wore one of his gowns to the Cannes Film Festival this year).

His devotion to elaborate handiwork is palpable, with various techno treatments surfacing across the collection. More than 50 embroidery techniques were used on one black lace dress alone, with a neo-folky feel, peppered in quirky mix of flowers and cartoonish motifs like pineapple-flowers and cutesy twists on the Evil Eye symbol.

But his strength lay in the outwardly simpler pieces. Case in point: an ensemble pairing a hand-beaded black skirt in geometric formations with a backless black sweater glinting with Lurex threads and colored Swarovski micro crystals. It looked ready to head to the disco, as did a pleated skirt that alternated strips of hologram sequins in a rainbow spectrum with sheer panels to show a bit of skin, matched with a graphic black leather top made using different braiding techniques.

While there was nothing groundbreaking in Kadi’s vision, his modernizing of traditional couture techniques — embroidery, braiding — with new materials made for a unique spin.