For his fall couture collection for Schiaparelli, Bertrand Guyon took inspiration from the house founder's famous circus collection of 1938. 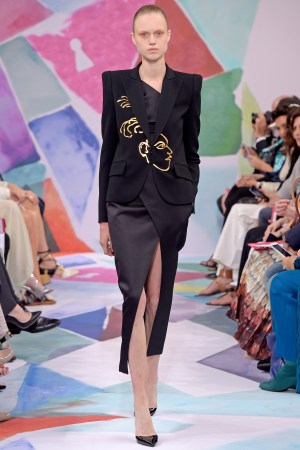 Fashion, a circus? You don’t say? For the couture collection he showed for Schiaparelli, Bertrand Guyon codified the message. Not without precedent: The house founder and surrealist superstar Elsa Schiaparelli famously showed a circus collection of her own in 1938.

Guyon transformed his show space at the brand’s headquarters in the Place Vendôme into a dream-sequence setting, the walls and floor painted in a mesmerizing watery harlequin motif. As for a sideshow (I know, “sideshow” suggests carnival more than circus, but circus, carnival; tomato, to-mah-to), how about Guyon’s former bosses at Valentino, Maria Grazia Chiuri and Pierpaolo Piccioli, who cheered on their former protégé from the front row? Despite some rumors you may have heard, they sat together talking and laughing, as if they have not a care in the world.

Now in his third season, Guyon takes a traditional approach to couture, focused on high-polish tailoring and grand eveningwear. He has an affinity for extravagance, and not just the obvious type requisite for couture, but extravagance of attitude and of visual expression. The former can be a problem as it dates the clothes. Here he held the hauteur in check, an important positive step, though he has a way to go, as one wished for a respite from the severe architectural shoulders. As for the latter, he loves the decorative flourish, especially the sort of whimsical pictorial renderings so important to the house history — and of the kind again in the forefront of fashion, largely in the work of Chiuri and Piccioli as well as Gucci’s Alessandro Michele. This is not to say that Guyon’s clothes look like theirs not at all; only that representational decoration is having a moment, and armed with archival references, he’s in on it. Thus, he rendered his circus theme via elaborate embroideries of jugglers, clowns, trapeze queens and plumed horses performing their antics across jackets and jackets; one dress flaunted a giant Ferris wheel surrounded by prancing horses. At their best, the results were flamboyant and fun.

And importantly, Guyon knew when to say when. He countered the circus euphoria with draped goddess gowns, some in soothing constellation prints. (Schiaparelli’s astronomer uncle thought her multiple beauty marks looked like Ursa Major.) A little star power of the chic sort.