A Shakespearean sonnet, and maybe the swan song of Maria Grazia Chiuri and Pierpaolo Piccioli's partnership. 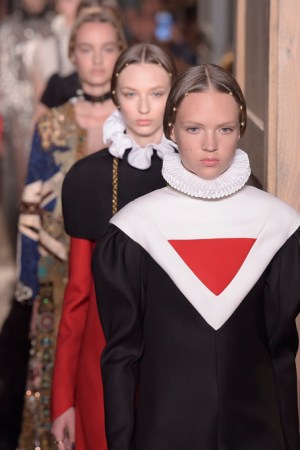 All the fashion world’s a stage, there’s no question about that. Tomorrow, one of its most intriguing current dramas, the fate of the long-running creative partnership between Valentino’s Maria Grazia Chiuri and Pierpaolo Piccioli should find resolution, as the house is expected to confirm the much-rumored departure of Chiuri and, in short order, her hiring to fill Dior’s creative director role vacated by Raf Simons in October. Assuming that’s all true, Piccioli and Chiuri designed this collection knowing it would be their swan song in a collaboration that began at Fendi and thrust them into the forefront of fashion at Valentino.

Whether their impending professional schism impacted their decision to celebrate Shakespeare 400 years (and two months or so) after his death, who knows? Surely they are entitled to a perhaps unsubtle reference to what they’ve brought to fashion, ushering in a powerful poetic movement that thrived in opposition to virtually every other vein of current popular culture. They not only revived the aspirational allure of romance and lyrical beauty, they made it cool. It didn’t happen overnight; their first collection, for spring couture 2009, was steeped in excessive reverence to the house founder. It took a while for Piccioli and Chiuri to find their own Valentino. It proved a magical discovery, one they made the most of for fall.

While backstage — and with it, the designers’ spoken perspective — was uncharacteristically off-limits, the show notes claimed that their Shakespearean sonnet would not grasp “the stories, the plot or the protagonists,” but “the individual’s interior multiplicity.” So it was something of a surprise when the show opened with a shirt story, not of the billowing poet’s-sleeve variety, per se, but with plenty of literal, ruff-collared Elizabethan allure. These crisp whites peeked out from black pants looks, and extended into dresses under vests and coats. It was a little costumey and very lovely, each look detailed to distinction.

Evening soared. This is where Chiuri and Piccioli have had their greatest impact, and here, they carried on. Gowns ranged from sheer, draped chiffons and delicate embroideries to a regal affair in an imposing animal jacquard. A minimalist spin came in humble wool — an austere black stunner with a flash of white at the shoulders and a red, white and black group that injected some bold midcentury graphicism into the Renaissance regalia. Just beautiful.

Now, Piccioli, who’s expected to remain at Valentino as solo creative director, and Chiuri are on to Phase Two of their careers as famous designers, each one alone. It will be fascinating to observe.