The designers repurposed scraps from collections across their career, yielding charming rag-rug embellishments on vintage garments. 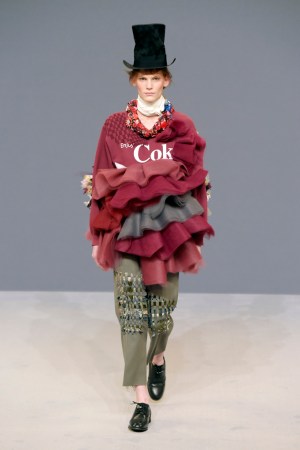 Let’s hear it for hoarding: Viktor Horsting and Rolf Snoeren have kept everything, even the leftover silver sequins from the collection that won the Dutch duo top prize at the Hyères festival back in 1993.

They repurposed those sequins, and scraps from collections across their career, for their charming fall couture collection, weaving their own fashion history into rag-rug embellishments on vintage trenchcoats, military jackets, sweatshirts and denim.

Their impulse was sustainability — and to challenge themselves to create something different from fragments of the past. “The first feeling we had was, ‘We want something organic,’” Horsting said during a preview. “We were thinking of conscious designing, and recycling. It felt kind of logical.”

Filing past the racks, the designers could identify many — but not all — of the fabrics, including bits from their “Blue Screen” and “Van Gogh” shows — fall 2002 ready-to-wear and spring 2015 couture, respectively. They also cut and tore up dresses from their archive, documenting the destruction on Instagram and confessing no remorse. “It’s good to create something new and not get stuck in the past,” Snoeren mused.

Also proving that nothing should be discarded, lest it find another purpose, Horsting and Snoeren borrowed songs by Linda Perhacs for the soundtrack. They explained that she is an American folk singer whose 1970 album went unnoticed, until it was rediscovered about 10 years ago, thanks to the Internet.

Beyond the fabrics, the silhouettes referenced past Viktor & Rolf shows, particularly the bulging finale coats, recalling their “Russian Doll” collection that nearly swallowed Maggie Rizer. Yet they succeeded in creating something fresh and  often ravishing — an haute vagabond chic, complete with crumpled paper top hats and hobo patches on knees and elbows.

The sweatshirts and military jackets were marvels of jutting ruffles and twinkling patches of vintage buttons and errant crystals, the patches repeating on cropped jeans and khakis. The show reached a dramatic crescendo with a clutch of trenchcoats that morphed into full-skirted ballgowns, scraps of tulle tinted into delicate dégradés.

The white gown that capped the display also winked to Viktor & Rolf’s next move: A collection of wedding dresses, a venture with Justin Alexander, slated to debut in October during New York Bridal Week. This show seemed a good omen, since it had something old, new, borrowed — and blue.