A lean silhouette dominated in jackets and skirts in mixes of icy pastels through a considerable range of eveningwear. 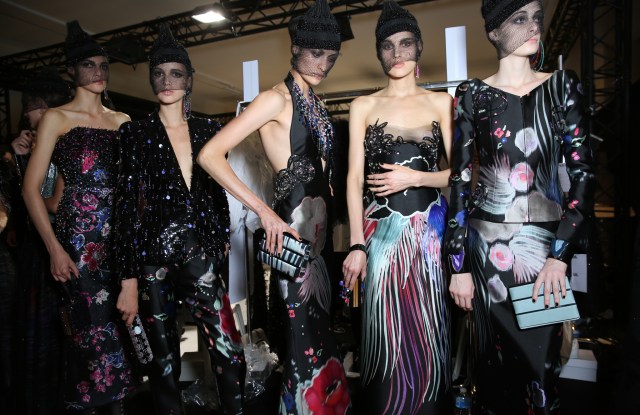 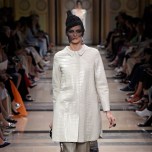 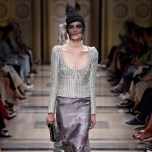 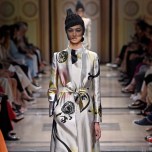 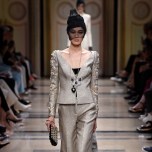 The arrival of a pristine white card featuring an embossed putto, apparently taken from an architectural relief, got you wondering about the theme of Giorgio Armani’s Armani Privé show. Old World grandeur? Whimsical romance?

As it turned out, the image heralded not the show’s theme, “Mystery,” but Milan’s Palazzo Orsini, now owned by Armani and the site of his atelier. After years of a minimalist approach to his venue, for fall, Armani decided to up his ante in the set stakes, installing inside the Théâtre National de Chaillot imagery derived from the palazzo’s interiors: in the reception area, large photographs of murals and, lining the walls of the runway space, a mini replica of a lavishly paneled room. It made for a lovely setting, made lovelier still by American-level air-conditioning and seating with ample rear-end room.

By transplanting to Paris the trappings of his Milanese base, Armani seemed to telegraph that this would be a deeply personal collection, no less than if he’d played “I Gotta Be Me” on his soundtrack. Yet while all of the signatures were there — the specific tailoring, the fabric mixes, the wacky hats — Armani stuck a pin in Privé’s typical grande dame attitude, letting some stuffiness out and fresh air in. And if the show’s title, “Mystery,” played out a tad cryptically (apart from some veiled headgear late in the show), who cares?

A lean silhouette dominated, starting with jackets and skirts in pretty mixes of icy pastels. Although some of these could be considered daywear, Armani has really dedicated Privé to evening and here, he offered a considerable range. While there was some excess, particularly in an overzealous use of fuchsia and black (a for-the-birds feather top and big bubble of a cape, both over black skirts) there were also numerous beauties. A pair of one-shouldered gowns flaunted sprinkles of festive confetti embroidery, while a sparkly top-and-skirt moment worked a dressed-down attitude. What stood out as newest: Armani’s audacious graphics. In particular, artful, oversized florals imbued siren gowns with modernist chic.