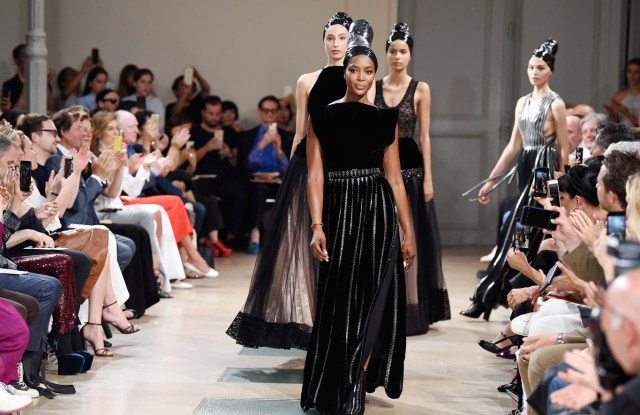 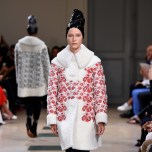 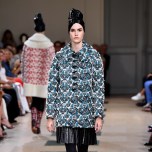 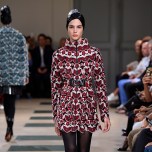 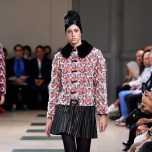 Message to Mr. Alaïa: If it takes another six years to make your next couture collection, we’re prepared to wait.

Naomi Campbell, the couturier’s adoptive daughter, opened the show to whoops from the crowd, dressed in a short, black-and-white, embroidered A-line shearling coat with toggles, her hair wrapped in a high plastic turban evoking at once the grace of bygone couture and the hairdo of an African queen.

An Alaïa show never feels completely new, but there is always the unexpected material research and the textures, at once subtle but rich, that makes it feel like it’s something one hasn’t seen before. That was the case here.

The couturier has a way of digesting references that is never literal. Take, for instance, a red embroidered motif used on one of the opening big-collar shearling jackets that spilled onto matching leggings and boots, creating a trompe l’oeil thigh boot effect, then, later down the line, a gorgeous velvety dress with a ruffled skirt. It recalled Art Deco roses but also had a folkloric feel. A blue-and-white diamond motif on a sleeveless knitted dress, meanwhile, resembled an argyle print but also had vaguely medieval airs. There was also a Sixties cocoon feel to some of the coats, with the designer spinning fun lampshade shapes on a couple of his signature knit dresses, some with a glittery finish. His signature pleated skirts in strips of leather lent a sharp counterpoint to the textures.

One of the most captivating things about the show, as ever, was Alaïa’s mastering of fabric weights, like on a panther print silhouette layering a cropped jacket over a matching body with a long, long, black and silver pleated skirt that moved perfectly.

The heart also skipped a beat at one of the showstopper sculptural black gowns, combining a knitted tank top with at the hips a domed roof of black velvet edged with dripping crystals, flowing into a sheer tulle skirt and what looked like a knitted leather or raffia hem. It had a folkloric, Russian feel. And much like the rest of the collection, the dress, in both form and content, looked made to sublimate a woman’s body, and had a force to it.