Karl Lagerfeld focused on an essential tenet shared by the Eiffel Tower and couture itself: perfection of structure. 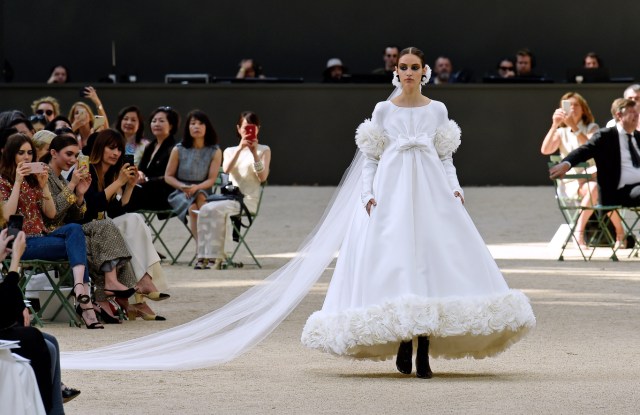 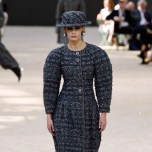 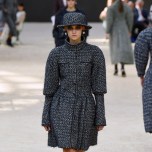 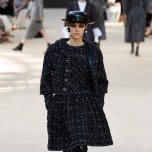 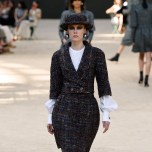 After umpteen years of captivating, grand-scale sets for Chanel — art gallery, aircraft, grocery store, underwater kingdom, Hausmann-esque city street, all brought to life under the splendid dome of the Grand Palais — it is uncanny that Karl Lagerfeld chose this particular moment to install a replica of France’s most famous, most romanticized, most representative structure, the Eiffel Tower, or as least as much of it as one could see before its spire faded into the clouds that hovered in mysterious perfection over the crowd assembling below.

Lagerfeld conjured and commissioned the work well before the presidential election that brought Emmanuel Macron into power and before learning that, immediately after his couture show today, Anne Hidalgo, the Mayor of Paris, would honor him with the Grand Vermeil, a medal bestowed in recognition of extraordinary achievements in service to Paris. During a preview, Lagerfeld tried to explain the kismet of the timing of this particular set, and along the way belied his oft-stated insistence that’s apolitical. “It’s all about France,” he said of his show. “This is the moment for France, with M. Macron as president. I predicted it.”

The show played as an homage of one icon to another, Lagerfeld unabashed in his love for the City of Light and its great symbol that beckons all while standing majestic and elegant. The clothes reflected that power and elegance — no kitsch, no trompe l’oeil jokes, no irony. Rather, Lagerfeld focused on an essential tenet shared by the Eiffel Tower and couture itself: perfection of structure. To make the point, the press kit featured multiple looks, each shot twice, once in black-and-white and again, in silhouette, visible only as a precision outline.

There was a lot of silhouette to take in, as Lagerfeld unified a myriad of options by savvy application of a few essential elements: thick tweeds and a serious, mostly dark palette; controlled compositions of feathers adorning sleeves and hems; a boater matched to every look and sometimes, a matching bag as well.

Many, though not all, of the tweeds were on the heavy side, and were worked into equally imposing shapes, some featuring a demonstrative round, sloped shoulder. The silhouettes came curvaceous (sculpted hourglass coats and suits) and linear (fingertip-length jackets and tunics over skirts); long, short and in-between. Whatever their line, the day clothes featured almost no additional adornment beyond surface texture; even the buttons blended in. The major exception: the feathers, worked into flowers and placed strategically on the hip pockets of a simple suit, or as surprising armbands on an otherwise simple coat.

Evening continued the elegant aura, its discretely heightened decorative flourishes never gratuitous and always interesting. Two dresses speak to the collection’s unified diversity: a black column with corset construction and feather spikes shooting from its shoulders, and a party dress, a dream of softly pleated, full-skirted chiffon buttoned and banded with subtle jewels. One stopped short of arch, the other, of sweet. Both oozed haute Parisian chic.

Immediately after Lagerfeld took his bow, the mayor presented his medal. “Vive la France!” said Paris’ longest-tenured couturier in his acceptance remarks. And vive Karl, Chanel and couture itself. Just like M. Eiffel’s masterpiece, part of the wonder of Paris, too.