Medieval queens was the theme of the wintry collection mixing jewel tones, velvet and lace. 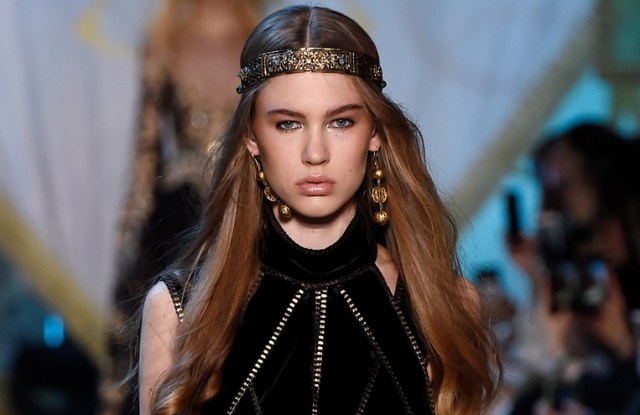 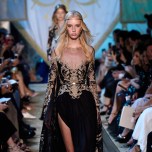 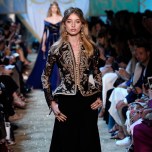 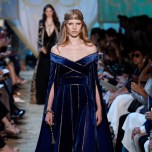 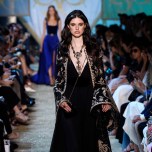 Embellished red-carpet princess dresses are Elie Saab’s specialty, and here the Lebanese couturier stepped it up a notch in a collection fit for queens. On a path strewn with gold sequins, with embroidered banners hung at the end of the runway, Saab sent out a royal procession of medieval-inspired gowns in wintry jewel tones like ruby and forest green, and touches of fur.

The interest was in the surface play, with nature motifs climbing across dresses, or smatterings of pearls, and ribbon accents and Celtic embroideries adding graphic impact to bodices. The plays on matte and sheer fabrics also worked well, especially on the gowns with alternating pleats in lace and velvet on the skirt.

Look close and golden snowflake embroideries peppered the skirt of one gown with gleaming cock feathers embellishing the sleeves, lending a fairy-tale quality to the cinematic collection that climaxed with a bride in an embroidered cape so expansive it required two damsels to carry it. “It’s enough to make you want to renew your vows, it was magical,” cooed actress Roxane Mesquida who’d been eyeing up the gowns from the front row. “It was very ‘Braveheart.’”