Karl Lagerfeld showed skirts shaped like petals, cocoonlike capes and outfits bedecked in a garden’s worth of blooms. 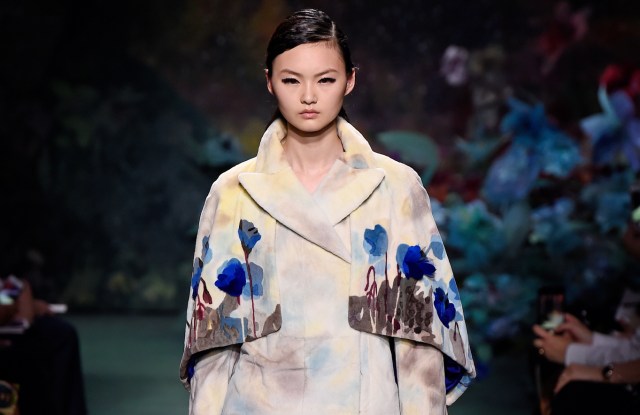 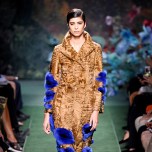 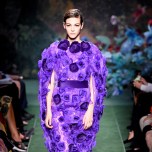 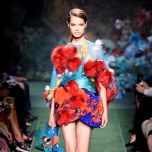 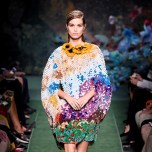 As the curtains parted at the Théâtre des Champs-Elysées in Paris, revealing a set of screens hand-painted with trees, the strains of Claude Debussy’s “Prelude to the Afternoon of a Faun” filled the air. You half expected Vaslav Nijinsky to come bounding out of the wings.

The Russian ballet dancer has been closely associated with the premises since he premiered another of his revolutionary choreographies, “The Rite of Spring,” at the venue in 1913 — famously causing a riot among spectators.

The show notes for Fendi’s fall “haute fourrure” show on Wednesday night did not namecheck Nijinsky, or the painter Léon Bakst, who designed sets and costumes for the Ballets Russes — but their influence was apparent in the collection’s painterly effects and exuberant celebration of nature.

After all, it was Bakst who once exhorted his fiancée to “dress up like a flower.” Karl Lagerfeld brought that image to life with skirts shaped like petals, cocoonlike capes and outfits bedecked in a garden’s worth of colorful blooms.

In front of an audience heavy with clients — and a box where Bernard Arnault, the owner of Fendi, sat with family members — the designer opened with a red lace dress with a capelike bodice dotted with peonies.

Lace turned out to be a major story in the collection, but lest anyone question its relevance to a fur house, the Fendi team researched new techniques to inlay it with shaved mink, adding fur and feathers for three-dimensional effect.

They also explored trompe-l’oeil lace effects: strips of leather assembled into flowers on a beige skirt suit, or bits of fur pieced together on a white honeycomb fishtail cape. Speaking of painstaking: a cocoon cape in a pixelated pattern was made of 10,000 paillettes of shaved mink stitched by hand onto silk organza.

While other effects appeared less labor-intensive, they were nonetheless technical feats. Adwoa Aboah was striking in a jacquard coat decorated with blue poppies embellished with mink, organza and feathers; the fictional blooms also appeared on a stunning hand-painted shaved mink coat.

Soaking up the applause, Lagerfeld borrowed a page from the theater playbook and took his bow no less than three times.