Giambattista Valli defied the seasons with his couture show, which was an ode to spring gardens. 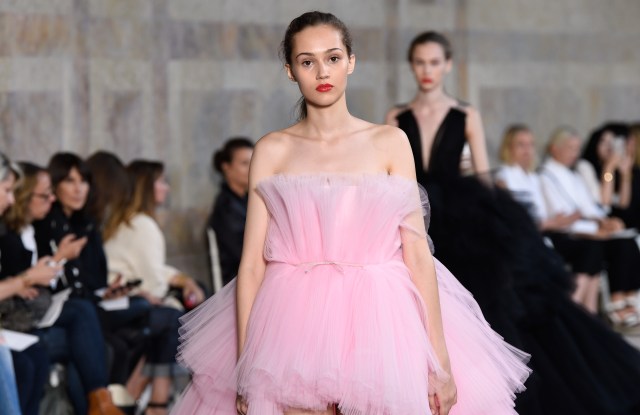 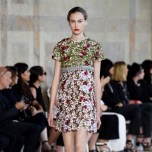 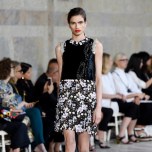 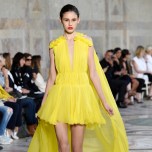 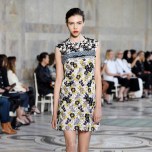 Fresh from the news that he has a new investor — French billionaire François Pinault, no less — Giambattista Valli decided to say it with flowers, with a fall couture show that was an ode to spring gardens.

Models picked their way across the mosaic floor on needle-thin black satin platform stilettos that accentuated the thinness of their legs, poking out of minidresses embellished with lace, sequins, embroideries and macramé in dense floral textures.

These alternated with draped chiffon dresses in  pastel shades, including one that Valli described as “cuisse de nymphe émue” — an old variety of rose known in English as Great Maiden’s Blush. Valli’s sylphs may look inoffensive, but their blood-red lipstick and killer heels suggested otherwise.

“Nymphs and muses,” the designer said after the show. “The idea is to have this kind of freshness of these innocent girls, but with a slightly perverse touch.”

He added structure with panels of jet bead embroidery and bold graphic accents — wide black-and-white bands on the waist of a floral-print dress with a lampshade petticoat skirt, or a thick black bow on a bouclé tweed skirt suit edged with crystals.

There were 18th-century references aplenty, especially in the romantic silk faille evening dresses with gardenia or lily of the valley embroideries. And then, of course, there were Valli’s showstoppers — ballgowns made of sprays of pleated tulle with huge sweeping trains.

After the models made one last, leisurely sweep of the venue for the show’s finale — trains and heels don’t make good bedfellows — Dion jumped to her feet to applaud the designer. All that was missing was an actual bouquet.