For Maison Margiela Artisanal, John Galliano had his way with the humble trenchcoat. He had an epiphany as well: Glamour needs an audience. 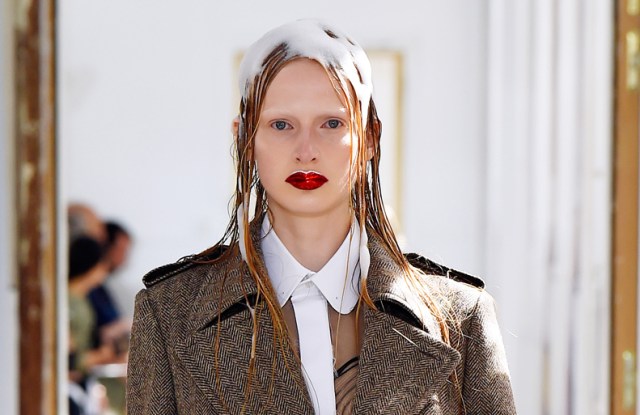 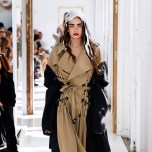 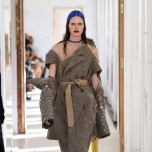 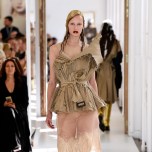 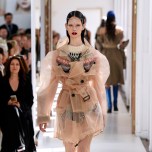 What is glamour? Can it be created, bestowed, evolved? John Galliano has ruminated on those questions all of his working life. For the Maison Margiela Artisanal collection he showed on Wednesday morning, he was inspired, he said, “by the idea of proposing a new glamour. I’m not saying I found it, because it’s a working process.”

Listening to Galliano talk fashion is probably what it was once like listening to Michelangelo talk about art — as much privilege as education. During a preshow preview, he noted that he always returns to familiar images of famous icons — Elizabeth Taylor, Marilyn Monroe — but added that Riley Keough strikes him in a similar vein, “and our Instagram babes” as well.

The preview occurred in Galliano’s eccentrically appointed salon at Maison Margiela. The show would take place one floor below, in two rooms, one set with countless offbeat items with which he surrounds himself while he works; the other, installed with a row of hair-and-makeup stations. The idea was to provide guests an inside look at what goes on at the Maison. The concept came together in four days after Galliano had to vacate his usual show space at Les Invalides because of the funeral of Simone Veil.

For the clothes, Galliano started with the notion of distilling glamour to its most obvious markers. He came up with 10, among them, “a red nail, a high heel, a décolleté, a cape, a feather, a sequin.” He likened them to Picasso’s famous Dove (a picture that resided on his inspiration board) in that, “in these few lines, it has come to symbolize peace. A child could understand that.”

He also pondered ways to achieve the “speed of glamour”: “She puts on a red lip, she grabs a humble coat in haste and is out.”

That grab-and-go coat, specifically the trench, formed the foundation of the collection. Possessed of its own grounded glamour, (here’s looking at you, Coat”), its “humble” guise upgraded brilliantly to haute when de- and reconstructed according to the designer’s prescriptions.

Galliano did what he does so beautifully: distort, twist, cut and shred with guts and discipline. Coats morphed into a frilled dress and a bustier worn over airy, bias-cut wonders. A trench and men’s topper fused together. The fabrics amazed: sheer organza layered over opera-length mittens dotted with giant paillettes; a simulation of corrugated cardboard, an outerwear version of a Frank Gehry chair. Shots of Yves Klein blue added artful punch, while flashy metallic cowboy boots nodded to “The Misfits” and American pragmatism.

Speaking of pragmatism, for all its intrigue and masterful constructions, a compelling reality factor played throughout the collection, with an emphasis on clothes for day. Surely numerous fashion professionals in the audience had lapses when they crossed over into the customer’s mind-set: Oh, for a ready-to-wear-version! (I know at least one did.) Happily, Galliano subscribes to the traditional philosophy that a house’s aesthetic should be established in couture and interpreted for broader use via rtw. According to sources, after the recent arrival of new chief executive officer Riccardo Bellini, Maison Margiela will rework its rtw to more closely reflect the tenets of couture. In addition, the company is mulling a handbag launch, putting men’s wear on the runway, and, according to rumors, a fragrance.

If a scent soon wafts from the Maison, expect a glamour note in there. Still, while developing this season’s premise, Galliano discovered that he, and for that matter, his clients, can only do so much. “Glamour cannot exist without an audience,” he said. “You can have intellectual glamour, you can have a sense of humor and be glamorous, but without an audience, that lumière — it doesn’t exist.”