The Russian designer unfolded a new chapter in her tailored couture tales with a collection that referenced Al Capone and Michael Jackson. 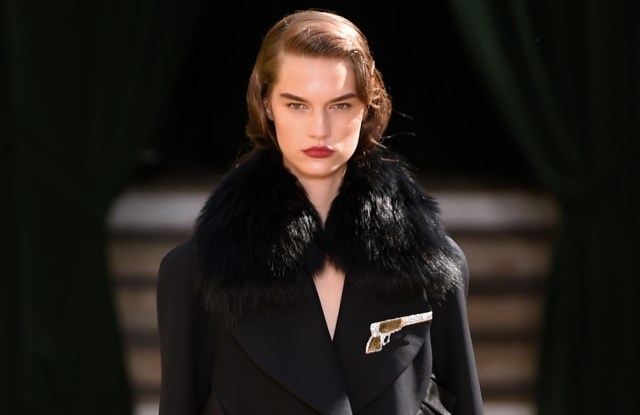 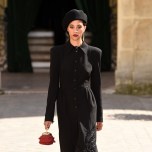 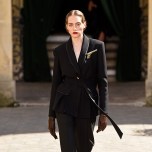 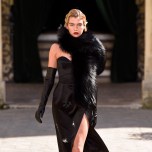 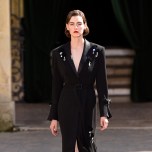 Luscious lips getting a fresh coat of lipstick, bullet holes in the windshield: Ulyana Sergeenko’s invitation set the stage to present the perfect wardrobe for a gangster’s moll — or what to wear for one’s own heists. After all, villains can sometimes have the best taste in clothing.

But her starting point to the season was a picture of her grandmother in a tailored black dress in the late Forties. It meshed well with an underlying thread about the thrifty elegance of people in the then-USSR, when elegance was a matter of underworld connections and contraband.

Cue tailored outfits that played with femme fatale tropes — nipped waists, marked shoulders, wide cropped trousers and also the lingerie-inspired light looks — which fit Sergeenko like the bejeweled white gloves seen on some silhouettes. Segueing into Michael Jackson’s “Smooth Criminal” and masculine suiting was only a sliding side-step away.

As always, craftsmanship was impressive. Vologda and Yelets laces were overlaid on bustiers or used as kerchiefs pinned on lapels. A bow design was actually a see-through lace appliqué. Bullets and musical instruments appeared as embroideries hiding along hemlines.

The boudoir burlesque theme felt like a ghost note, but Sergeenko hit the bull’s-eye with her severe tailoring. Whether a tweed coat with a scarf attached, a tuxedo with a pleated back that fluttered open at every step or giant overcoats with fur collars, these were the motherlode in this caper.