For fall, Galliano has somehow applied the developments of those seasons past and arrived at a place of nomadic currency. 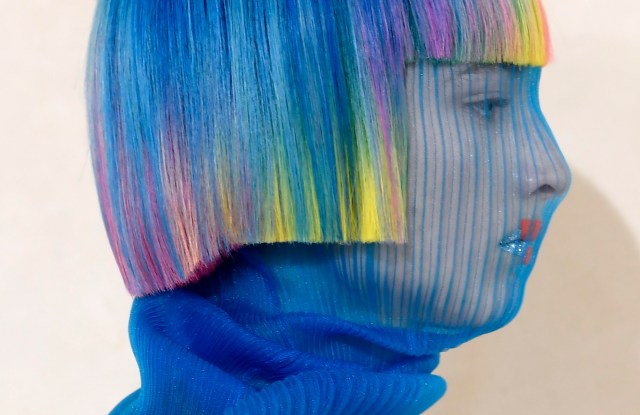 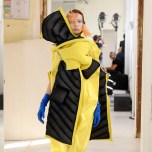 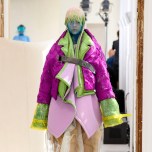 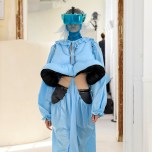 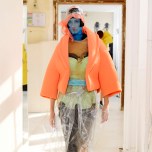 An otherworldly tribe, faces shrouded in acid-toned ribbed stockings, heads helmeted in cellophane, foil or Crayola-hued fake hair. They view the world through virtual reality lenses and stomp on silicone platforms, cell phone clamped to arm or calf. They look like no one you know, yet in the piles and piles and piles beneath which they’re cocooned, you recognize allusions to the familiar — bombshell bustier, gentleman’s polished tweeds, pragmatic puffa. Only none of it is quite as it should be, the comfort of familiarity unsettled by iconoclastic application.

To quote the song, what’s going on?

Why, it’s part of an “ongoing study of seductions in the millennial era,” silly! The study’s director: John Galliano, perhaps the haute laboratory’s most rabid experimentalist for 20-plus years, first at Christian Dior and now at Maison Margiela Artisanal.

If the photographs here don’t scream glamour as you think of it, that’s the genius of Galliano. Part of it, anyway; he’s also really, really good at making clothes. But for the purpose of making sense of the seemingly unglamorous glamour he’s been touting for the past few seasons, Galliano has an idea and he runs with it. Sometimes he runs far, far, away from any place those with more linear thought processes could possibly imagine.

For fall, Galliano has somehow applied the developments of those seasons past — dressing in haste, décortiqué — and arrived at a place of nomadic currency. Foreign though they look, his runway denizens are not aliens at all. They’re us. “We’re all nomads,” Galliano muses in his second runway-specific podcast (compelling content with a delivery to match; Galliano could do Shakespearean voiceover work, if there’s a market for such). He implies that his runway pilings — carrying everything you own with you — represent the digital pilings we’re never without. “We’re all nomads today and we’re attached to our iPhones. It’s everything in our iPads. We are nomadic. We do move in tribes. I came up with this word: neo digital natives.”

To describe what digital natives wear is complicated business: They bind themselves in tulle tubes and get almost swallowed by multiple giant puffa jackets; they stuff jackets with upholstery wadding, make argyle skirts out of plastic squares and they love a giant Velcro closure. Their dominant look exists at the intersection of aggression and a weird, futuristic kind of comfort.

All of which made for riveting viewing the last day of the couture season. Yet Galliano’s point is not to merely make heads spin. As noted, he’s really good at making clothes. (One example, the giant needle-punched coat in look 26. Downsized a little, and in the vernacular of those leg phones, OMG!) “I’m a dressmaker,” Galliano says in the podcast. A dressmaker who believes in couture’s historical role as fashion’s greatest laboratory. To that end, he says as well that his “new glamour” examination may be nearing its end. If so, it will be fascinating to see where he goes next. In Galliano’s couture, experimentation starts with cutting and draping with the hope of discovery, particularly of new volumes that can drive fashion forward.

So, Marvin Gaye, what’s going on? Fashion. Frenetic, fabulous, and not for the faint of heart.