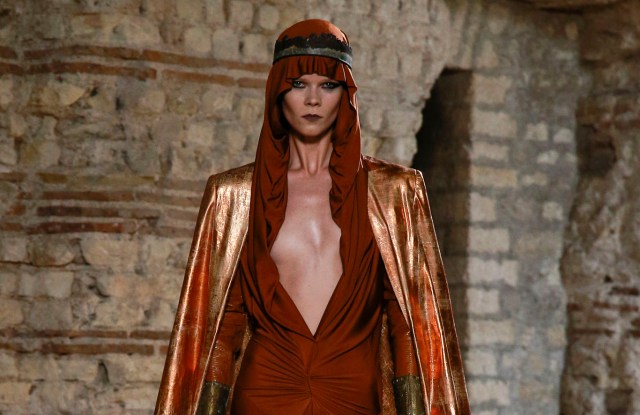 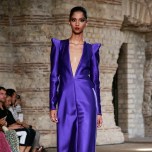 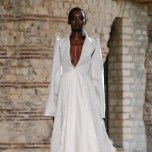 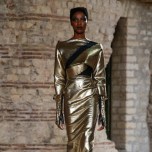 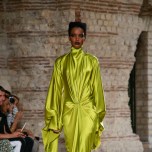 “Just when you think you’ve seen it all,” exclaimed Becca Cason Thrash after Nihilo’s debut couture show in Paris. “It was so monastic and literally from another time — I mean, medieval times — but somehow compelling, and lots of things I like.”

The Texan socialite has known Katharine Grace, who designs the label with her partner Krishna Godhead from their studio in Bali, for several years. But somehow, she wasn’t quite prepared for the duo’s mystical performance-meets-fashion show, held in the cavernous Roman baths at the Musée de Cluny on the Left Bank.

With their sculptural constructions, historical connotations and painstaking fabrications, the 19 looks defied categorization, which appeared to be the point. “The collection is a galaxy nonhomogeneous. Not one. theme. Not one. Variation of each other. Not one. Color pattern. one. Nothing,” read the cryptic show notes (random punctuation intactus, as they say in Latin).

Originally from Perth, Australia, both designers have a storybook past. According to their official biographies, Grace was a dressage rider by the age of 12, a florist at 14, and started working in fashion at 21, launching her label Kitty Grace at Perth Fashion Week in 2012.

Godhead, formerly known as Justin Smith, reportedly trained as a concert violinist under Yehudi Menuhin before becoming a fashion photographer. Since relocating to Bali, he has adopted a new moniker and appearance, as attested by his appearance post-show, all flowing gray locks and monk-like white robes.

Having staged a couture performance in Paris four years ago, the duo were making their runway debut in front of guests including their friend and collaborator Nick Knight, socialite-turned-singer Daphne Guinness and Casey Spooner.

Indeed, their creations were designed for performance: an Alaïa-esque hooded evening gown in rust-colored silk jersey, slashed to the waist, was paired with a cape hand-embellished with copper foil, lending it a medieval priestess vibe. Another dress featured eerie anatomical embroidery — minus the left leg.

The designers specialize in using hand-dyed animal hides, and there were some spectacular examples in this lineup, including an hourglass gown with a pale gray crocodile skin cascading from the bodice.

“We really love where we are from, and so we try to use the most of the resources that we have there, and I feel like that gives it a point of difference,” an emotional Grace said after the show.

The duo are clearly expert image-makers, and seem intent on building a real business: the show notes listed Koji Tatsuno as their Paris atelier director. While Nihilo’s religious leanings might put off some — the show opened and closed with inscrutable high priests in flowing robes — this passionate display could well make a few converts.