For his first Paris show, Noureddine Amir, a protégé of the late Pierre Bergé, sculpted his designs into the forms of an underwater world. 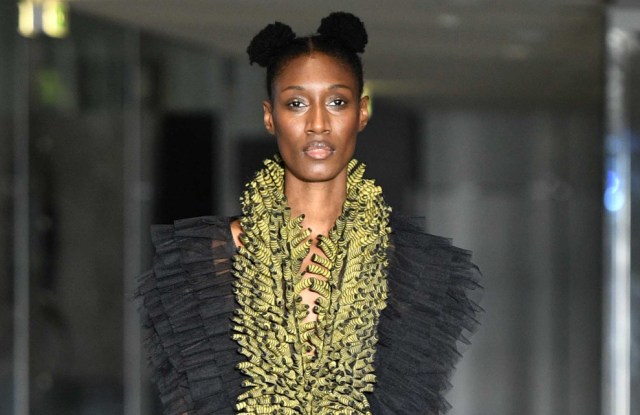 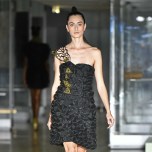 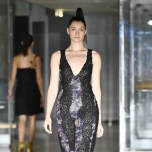 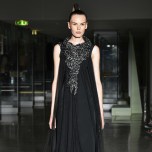 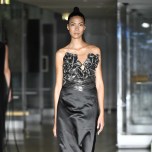 With his intimate first showing as a guest during Paris Couture, Moroccan designer Noureddine Amir, a protégé of the late Pierre Bergé, took his inspiration from the underwater world in a collection described as “art-to-wear.”

He sculpted muslin and tulle into forms that undulated gracefully like seaweed, stood out like coral formations or were shaped into spikes like the daintiest of sea urchins, as on the final gown.

Relatively simple lines were contrasted with techniques that were anything but. The mostly black palette gave the organic shapes an otherworldly feel, heightened by touches of metallic fabric that caught the light on the runway, housed within the appropriately hushed ambiance of the museum space at the Arab World Institute in Paris.

Elsewhere, muslin was sewn into spirals and tubes to make intricate patterns, approximating the textured intricacy of pebbles on the beach, or built up into bobbles to form a striking giant collar worn over a simple black silk caftan.

It may be Amir’s first official runway show in Paris, but the designer, a 1996 graduate of Esmod, is no newcomer, and this showed in his mastery of technique. His work has previously been shown in museums including the Museum of Fashion in Antwerp and the Arab World Institute. An exhibition dedicated to his work showed at the Fondation Pierre Bergé – Yves Saint Laurent before it was closed for renovation in 2016, and another at the Yves Saint Laurent Museum in Marrakech, where Amir is based, was staged earlier this year.