Redemption's Gabriele "Bebe" Moratti still offered up his dose of glitz, but to a quieter soundtrack. 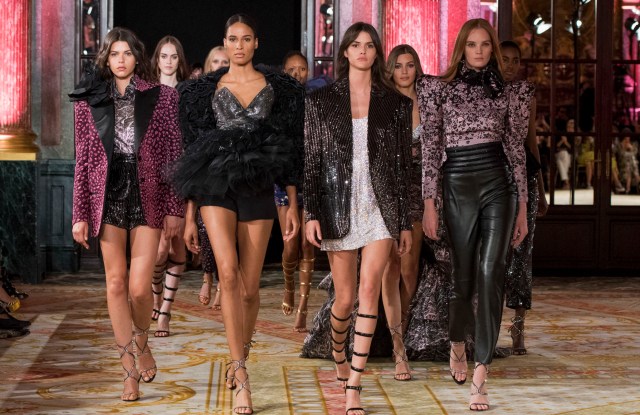 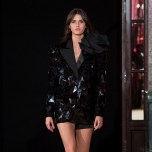 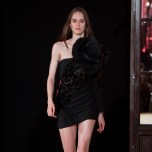 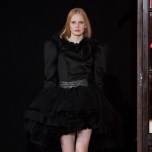 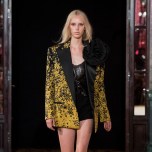 After skipping couture in January, Gabriele “Bebe” Moratti wanted to take things in a new direction for fall. The musical references were less blatant; instead of a blaring rock soundtrack, the music aficionado sent out his models with a string quartet playing in the background.

His designs still offered up their dose of glitz, but with plenty of hand-embroidered crystals and sequins to go around. Redemption’s proposition is never for the retiring wallflower, and that sometimes gets in the way of visualizing the craftsmanship involved in its Made in Italy creations.

The techniques and qualities of the fabrics used were distinctly visible in this collection, for which Moratti declined to reveal his specific inspiration, to be continued for the label’s next couple of collections, having recently had his ideas copied, he said backstage before the show.

Powerful Victoriana-inspired shoulders were a recurrent theme, and worked well on a mustard yellow and black brocade minidress or on a vivid blue duchesse ruffled shirt. This was paired with high-waisted pants with metallic flocked embroideries in a leopard pattern that were loud but proud.

With even bigger proportions, layers of organza were worked into something that looked a little like a luxurious rag rug, broadening the silhouette of several looks. In a more muted color palette, the ruffled ballet pink leather shorts were among the standouts.

Fluffy tutu-like dresses were worked with a gold moiré pattern in the same hue or in a muted shade of purple, while in a more graphic register, highlights included a geometric mosaic of Perspex embroidered onto a boxy tuxedo jacket.