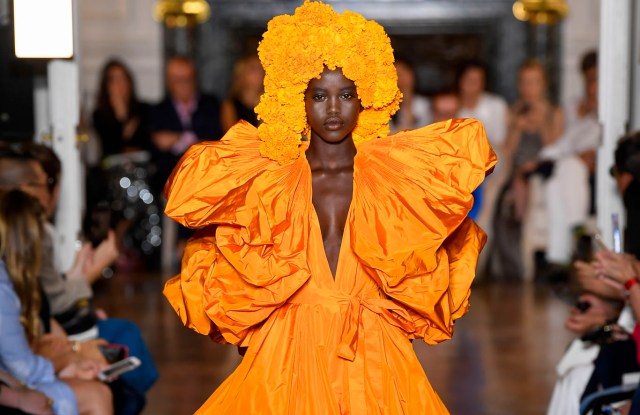 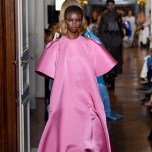 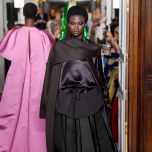 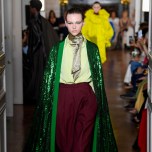 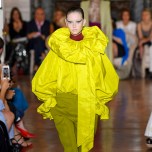 Guests arriving at Pierpaolo Piccioli’s Valentino show on Wednesday evening were diverted from the Hôtel Salomon de Rothschild’s main house entrance to a pebbled path to the right of the mansion. It led to a garden that, though open to the public, was a discovery for many regular showgoers, hidden until now behind one of Paris’ mysterious high gray walls. This time, Piccioli invited his quests there for Champagne and a visual treat. With its standing columns, animal statuary and glorious roses — some at their peak, others tinged with the romance of early decay — the garden felt like a secret wonder to which we’d suddenly been allowed entry.

It foreshadowed a wonder of a different sort that would unfold inside, a collection magical beyond words. During a preview, Piccioli showed several looks, each more breathtaking than the last. “A lot of drama,” a guest noted at the appearance of a grand green gown. “A lot of dream,” he corrected gently.

He nailed it. In approaching this collection, Piccioli didn’t want to think about a theme, preferring, he said, “to have a free approach with fabrics, embroideries, colors, etc. I wanted to go very instinctively.” Instinct took him from the 18th century to the Middle Ages to Greek mythology, and even to Joyce’s Molly Bloom, whose jumble of “memories from 10 years before and the moments before” got him thinking about time in a nonlinear sense — no sequential mandates, no rules, only an expression of dreams. “That is what couture is for me, a place where you [can express] your vision of beauty, your intimate dreams.”

It sounds poetic and heady, but a couture dream is only as powerful as its realization on the runway. Piccioli’s proved a glorious reverie in which the clothes became tangible manifestations of emotion. Schmaltzy? To some people, absolutely. But in this age of fashion inclusiveness, at least one definitive barrier remains: There are people who believe that a dress can express and elicit emotion, and people who don’t. Thank God, Piccioli resides proudly in the former camp.

It started with vibrant color and volume — huge, sweeping, take-your-breath-away volumes. A pair of exquisite brocades could have stepped out of 18th-century paintings. For all of its haute grandeur, the joyful finale — rustling explosions of blue, fuchsia, green and tangerine — somehow triggered the thought of an ultraglamorous (and considerably taller) version of Flora, Fauna and Merryweather. (OK, so Disney didn’t add a fourth fairy. What can you do?) There, silhouette and color were the message. Other dresses were about beautiful ornamentation, their elaborate intarsias and embroideries telling the provocative tales of Leda and the Swan and Europa and the Bull.

Yet Piccioli didn’t ignore his clients’ dreams for day. He inserted a flock of golden and green intarsia birds into a rust dress and wrap, and gave swagger to blouses and pants with flamboyant capes, including one in allover bright green sequins. Like the entire collection, it dazzled.

At the end, after a communal exhale and a rare, raucous standing ovation, the fashion crowd departed the Hôtel de Rothschild. Many exited left past that mysterious gray wall. It had enclosed the event itself, but not the memory of a magnificent fashion moment.