The anniversary show was based on remakes of conceptual highlights from across the brand’s 25 years of existence. 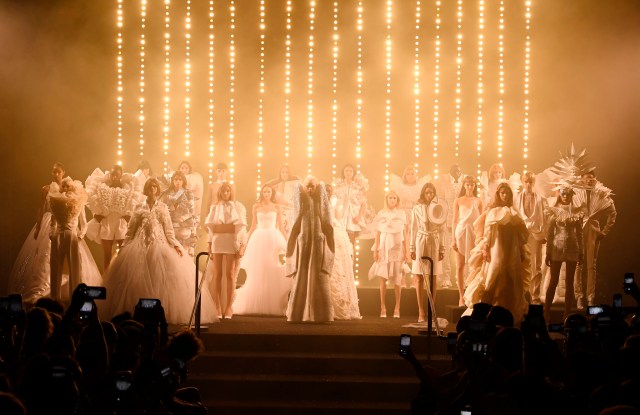 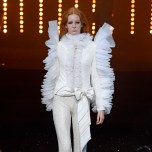 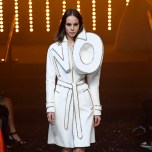 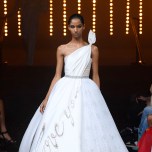 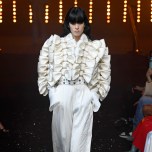 “Celebration.” That word looped hypnotically on the soundtrack for this anniversary show, based on highlights of Viktor & Rolf’s 25 years of existence, each conceptual look recast in white and embellished with Swarovski crystals. It accompanies a survey of the brand’s oeuvre showing at the Kunsthal museum in Rotterdam, titled “Viktor & Rolf: Fashion Artists 25 Years.”

But the Dutch design duo is not prone to nostalgia. The idea behind turning everything white, aside from serving as a clever way of uniting the pieces, “was also to make it lighthearted,” Rolf Snoeren said during a preview. “It’s very much saying: this is who we are, this is what we do. It becomes something new.”

“We find it quite remarkable that there’s a certain sense of timelessness to the pieces,” added Viktor Horsting, who had enjoyed the editing process, and “being able to erase and keep what we find succeeded best.”

Looking through the archives, certain pieces triggered memories of periods in their personal lives, the highs and the lows. “But then by making everything one and white and pristine, somehow it makes everything light,” said Snoeren.

A voluminous ballgown sheathed in a layer of decaying wool, based on their first dress, made the cut. (The original — presented at the Hyères festival in 1993, which the designer’s won — was in silver and gray.)

An accordion jacket set with a fanning spread of white shirt collars came from the fall 2003 One Woman Show collection starring Tilda Swinton. Other genius moments included a remake of a tulle gown with clean holes carved out of the skirt — from the spring 2010 rtw collection and originally in pink — made using one of their secret formulas.

“It’s like a magic construction, it’s very difficult to make,” said Snoeren, with Horsting completing his train of thought: “A lot of handiwork attaching lots of layers of tulle very lightly together so that there’s still air and movement, but also a solid shape.”

Closing the show, meanwhile, was a sparkly jacket from the Russian Doll fall 1999 couture show, in which Maggie Rizer was practically swallowed in nine consecutive layers. The piece is on display in the “Heavenly Bodies: Fashion and the Catholic Imagination” exhibition at the Met.

These were all their children, but if they had to pick a favorite it would be the opening look: a tuxedo with a giant multilayered ruff collar from the house’s fall 1998 couture collection that was shown twice, in darkness and light.

“It’s a look that has been photographed so much; the smoking, the ruffled shirt, there are so many things connected to what we do,” said Horsting, with Snoeren chipping in: “What we like to cherish in the end is the ideas. The most important garments are tokens of these ideas.”