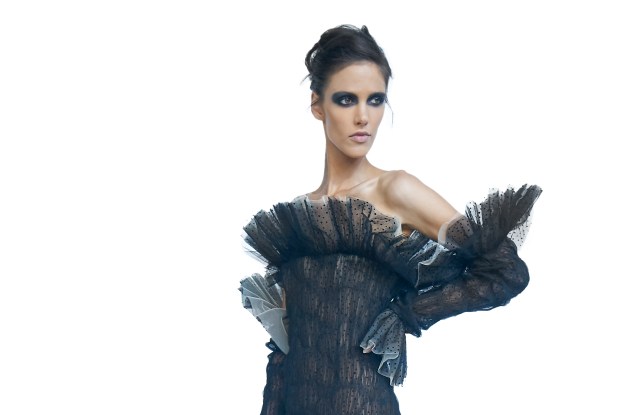 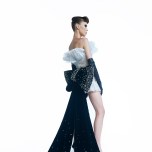 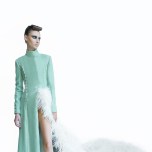 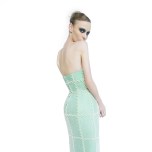 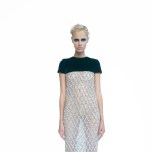 August Getty’s gothic, theatrical “Enigma” collection visited a dark, melancholic world of graveyards and masquerade balls. One armor-like minidress was molded from resin like an ornate tombstone, complete with a gargoyle on its shoulder. Another, in black leather, had a pannier skirt and crawled with Swarovski spiders.

“Think of it as a ceramic umbrella,” Getty said when explaining the technique used to create another of the dramatic, sculptural pieces in his fall couture collection, his second. The design in question was a pair of voluminous pants hewn from white silk to look like Pierrot’s ruffled collar and a matching top that covered the arms and torso, enveloping the body.

Providing a contrast from black and white, mint green velvet was worked with a grid-like embroidery of pearls on a mid-length bustier dress, its silhouette exaggerated with a bustle, and was intended to give the effect of oxidized copper. In a darker manifestation of forest green, an allover sequin gown embroidered with ostrich feathers at its hem reproduced a ghost-like cherub’s face come to haunt Getty’s morbid but creative underworld.