Against a tony library setting, Virginie Viard took the creative reins at Chanel with a diverse, reassuring collection. 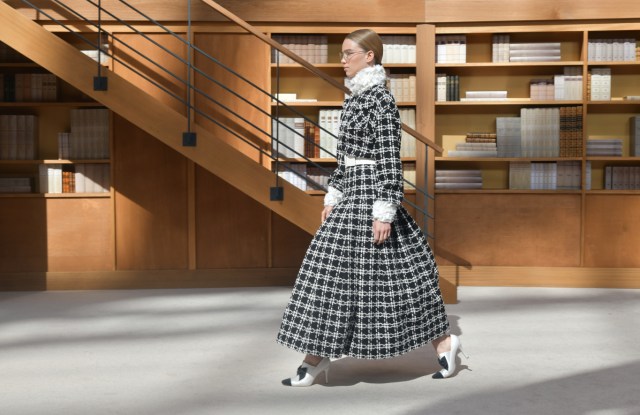 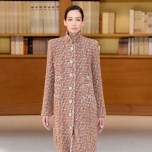 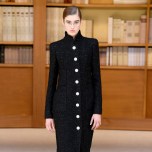 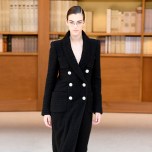 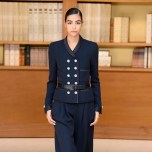 The Virginie Viard era at Chanel began in full force where the Karl Lagerfeld era ended: beneath the soaring dome of the Grand Palais, this time installed with an elaborately constructed, double-tier circular library, its main floor set with cozy sitting areas, the better to curl up for a good read.

Of the many significant associations with Lagerfeld, his love of books and penchant for acquiring them was legendary (he owned thousands), so one could have taken the installation as an homage. Not so, according to the press release that describes Viard as “an eternal book lover.” For fall, she sees her Chanel couture woman as favoring “slippers, loafers or pumps with a bow tie that reinvent the two-tone geometry of the house. Little glasses on chains give her the look of a young woman eager for culture, poetry, novels.”

That haute bookish attitude made for a charming ruse and a way into a collection that felt like an essential breather before Viard clearly sets the direction of her Chanel. Any newly installed creative director, whether coming from the outside or elevated from within, needs time to find her or himself within the brand. Viard isn’t any new creative director. She’s the one taking over from one of fashion’s most iconic and celebrated designers of the past 50-plus years who created the modern creative director role and returned Chanel to its juggernaut supremacy. Talk about the proverbial hard act to follow — on stilettos.

Viard thus eased into her head-honcho role with a wide range of looks and a major focus on tweeds seemingly intended as outreach to Chanel’s vast client base: “Ladies, whatever your preferences, we’re still here for you.” Within that, she showed some preferences of her own, particularly for a long, lean silhouette. This came in high-neck coats, some side slit and lined in bright white atop those spectator bow pumps, and trim jackets over trousers pleated for ease without losing that linear line. Viard also went full-skirted and long for day, and worked in a pair of green-and-black tweed overalls. For ladies with more abbreviated tastes, she showed short skirt suits and dresses in vibrant solids (raspberry and orange) and bright and neutral mélanges. Jackets were mostly small, some with fanciful leg ’o’ mutton sleeves or high-contrast white lapels. Evening, too, has something to please countless devotees across Chanel’s enviably broad haute client roster: chic tweed columns; simple beauties in black and white, the former a belted velvet goddess with shoulder bows, and the latter, languid white silk falling from a band of black and white flowers. There was also a full-skirted Fifties moment and a silver-on-pink embroidered gown that worked the youthful side of regal. The bride brought a subtle note of humor — ready for a good night’s sleep in a dreamy pink silk robe and PJs.

If it sounds like a lot, it was. The lineup telegraphed continuity and a savvy diversity informed by Viard’s deep appreciation of the house codes as invented by Coco and reinvented by Karl. And many of the clothes were beautiful, if less adventurous than the fall ready-to-wear in which Viard played a major role; then, the abundant tweed coat-and-trouser combos that looked very Chanel and very new. Here, Viard presented a partial anthology, beautifully executed. Now, she must continue to mine the riches of the full Chanel book, while shaping its future in her own voice.