After years of being a PETA target, the designer played with optical effects to create the illusion of fur. 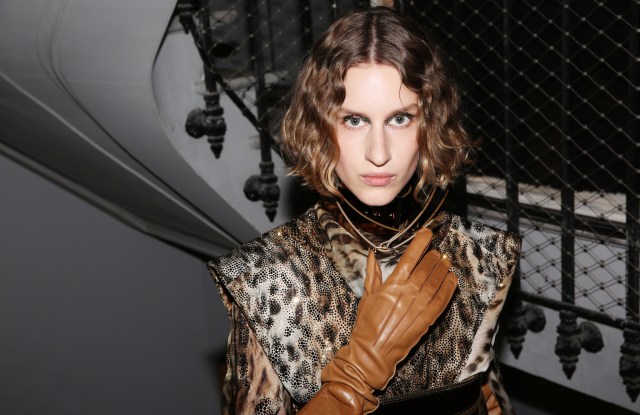 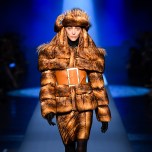 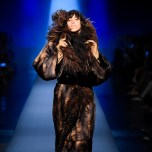 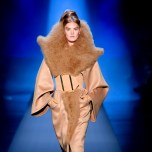 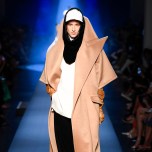 Guests arriving at Jean Paul Gaultier’s headquarters in the sweltering afternoon were offered a choice of refreshments: a Magnum ice lolly or a glass of Champagne. Either one was perfect fare to settle in and watch the pregame entertainment.

In a corner, Christina Aguilera sat with a sour expression as camera flashes went off in her face. Meanwhile, Hong Kong billionaire Stephen Hung, wearing silk Versace pajamas and velvet slippers, maintained an impassive expression behind his mirrored Ray-Bans. Robert Altman, eat your heart out.

By the time the show kicked off at 3:15 p.m. to the sound of Technotronic’s “Pump Up the Jam,” the space was filled with the kind of nervous energy one usually finds in a nightclub. Whoops and cheers greeted the first looks down the runway, including a quilted jacket that looked like it was made of fur.

It was an optical illusion: Gaultier, a fan of trompe-l’oeil effects, had used a photo print of red fox on the satin jacket. The designer, who in November revealed on French TV that he would be going fur-free after years of being the target of PETA protests, clarified that he hasn’t completely turned his back on animal pelts.

“Going forward, if I use fur, it will be only recycling,” he said. “I like fur, I’ve always liked it, but I think that since the world is already full of clothes and full of furs, there is no need to kill any more animals. Maybe with old furs, you can create new looks.”

Gaultier used marabou feathers to add a fuzzy touch to the high stand-up collar on a camel coat. He plucked a Victor Vasarely print from his archives and rendered it in chocolatey tones, giving a quilted satin skirt suit a reptilian allure. A leopard hide dress? All crystal embroidery.

As the Nineties house hits flowed, so did the visual gags and comic-book silhouettes. Gaultier’s clients err on the side of extroverted, and he helps them get their freak on. Even his black tuxedo jumpsuit came with a sleeve sprouting 3-D attachments, such as a jet-beaded conical shoulder pad.

Cone hats propped up tent-like veils, including one made of pleated purple tulle. By look 57 — an Op Art embroidered dress with rainbow feather sleeves — it was obvious that in Gaultier-land, no look is too far out. And why not? This time next season, his clients will be flaunting their picks, competing to see who wore it best.