John Galliano continued his exploration of decadence with an out-there focus on trousers and an ode to horse named Blue. 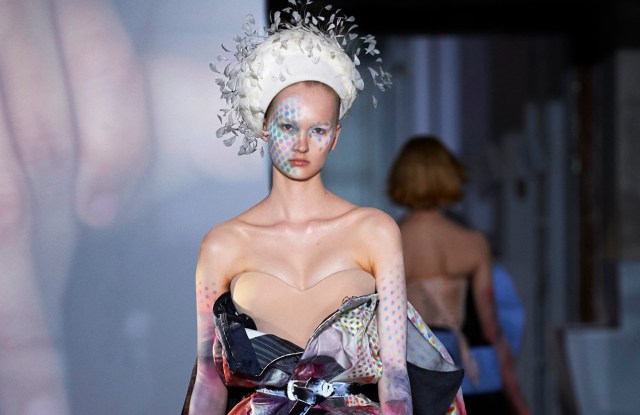 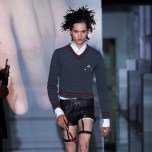 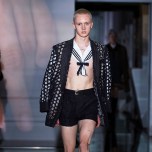 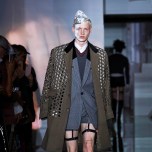 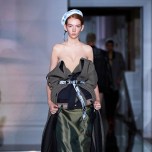 Chinos, lederhosen, breeches, flares — they’re not just kinds of pants. They’re among the historical research materials pictured in vintage photos on John Galliano’s Maison Margiela Artisanal mood board, from which he distilled a plan “to explore the trouser and how that could be transformative.”

Yes, Galliano believes in the power of pants (he prefers “trousers”) to transform, not only from one item of clothing into another, but an entire belief system as represented by sartorial selection. But I’m getting ahead of myself.

In the couture collection he showed on Wednesday morning, Galliano offered part three of his exploration of decadence. “Before, we were feeling the excess, and now I’m feeling we’re in decay, reflected by the breakdown of social structure. I’m feeling impulsive and anarchic,” he said in contemplative mode during a preshow visit at the very on-brand headquarters, a bastion of beautifully curated, chic dishabille. He then added a wry rejoinder. “I sound like a teenager, don’t I?”

Not at all. Nor did he sound like a typical designer during a typical preview. Galliano’s fashion speak is often dense. Talk of decadence moving toward decay led him to observe that “so few of us remember how to rely on instinct,” and that he rediscovered the power of instinct when he did equine therapy “in Arizona.” He describes “learning to reconnect with one’s self, and you know, I didn’t know how to listen to my head, I didn’t know how to listen to my heart, I didn’t really know the difference, and I lost all instinct.”

Blue, Galliano’s Arizona horse, made all the difference, once the two developed a comfort level based on trust. Somehow that led to Galliano’s assertion that “we’re all seduced by consumerism and packaging.”

Which finally brought the conversation back to couture. “The rigors of couture!” Galliano marveled. “The foundation one builds, the corset, the structures, the passion, obsession, fetishizing of couture. Fetishizing is a good word, and we do. We all have this desire today. Desire, with no reason.”

Desire with no reason — a catchy sound bite, though surely Galliano believes that at its best, couture offers ample reasons to obsess over and desire. And in his case, to transform.

Of late, Galliano has pushed very far from traditional notions of couture, and not just with the clothes themselves. To make possible his embrace of a fully genderless ethos, he fits each item on a woman and man, an approach reflected in the casting that featured a lot of guys. Yet he always starts the design process with that foundational rigor core to the couture genre, this time focusing on trousers as the object of his transformational zeal, applying his expert hand to expand, shrink, turn inside out and morph into seemingly unlike items — cape, bustier, cape, upside-down skirts.

Galliano continued his now highly refined process of decoritique, offering the “memory of” polka dots and lace in perforated tailored jackets. This time, he added to his range of inventions, introducing “projective filtrage,” a process of printing onto translucent fabrics such as crinoline, and laying them over denser layers. Here, Blue the horse galloped back into Galliano’s life, featuring in one of the prints, though even at close-up range, he was hard to locate within the mesmerizing patterns as the models rushed past the standing-only audience. Not so the naked-body photos projected onto walls throughout the show, a work by the artist Katerina Jebb.

Was it beautiful? Some looks were obviously so in total; some offered pieces to lust after; some made you wonder, why no trousers (just garters and undies) in a collection about trousers? But this is couture, and in couture, wonder sometimes works in mysterious ways.