In another stellar outing, Pierpaolo Piccioli claimed his place at the pinnacle of couture. 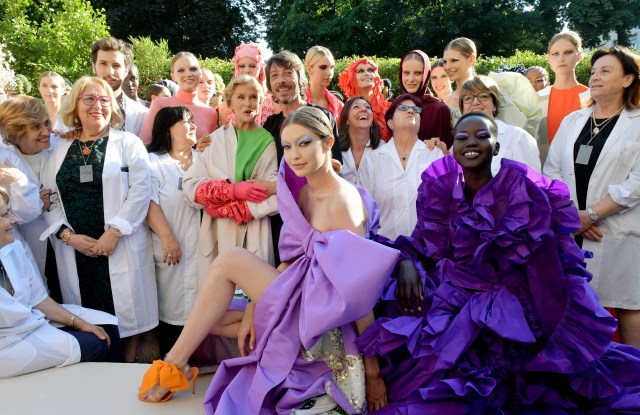 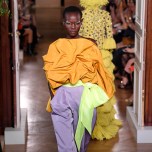 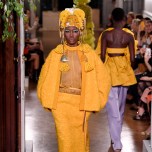 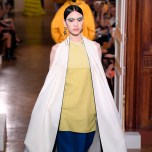 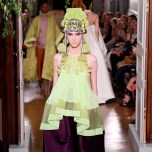 The magic continues. On Wednesday night at the Hôtel Salomon de Rothschild, Valentino’s Pierpaolo Piccioli staged another dazzling show. Make that an event, one without the bells and whistles of a major set, but with a high-intensity front row that itself dazzled — Gwyneth Paltrow and Celine Dion in white, and Piccioli’s new BFF Naomi Campbell, who didn’t get the white memo and instead rocked hot pink stripes and a floppy hat. Their row of honor was anchored by Valentino Garavani and Giancarlo Giammetti. (The positive relationship between the house and its founders, who cashed out years ago, is a lovely anomaly.)

The audience settled in for the latest turn in a brilliant series that has catapulted Piccioli to the forefront of the haute oeuvre. After the passing of Karl Lagerfeld and with John Galliano doing fascinating experimental work at Maison Margiela, Piccioli is its undisputed leader. His belief in couture’s ongoing relevance is well-known, including that even haute can espouse inclusivity as indicated by last season’s casting of mostly black models.

“It’s important today to dream of a world without boundaries, where everyone can live their own routes, everywhere. It’s just a dream, of course,” Piccioli  said during a preview. The sartorial realization of that philosophy is now also well-known — the color, the romance, the influence; Piccioli’s ethereal, sweeping trapeze shapes have inspired designers around the world. What gets less attention: his audacity. He said during a preview that he wanted “to get to this idea of women who are bold and daring, living their best life.” Well, it takes one to know one (bold and daring, that is). It takes creative guts to populate a runway with his flamboyant color mixes and most demonstrative silhouettes. This collection radiated the bravado of both — starting with the head-to-toe canary yellow number (as in mop-top hat to floor-sweeping skirt) that opened the show. The look manifested another aspect of Piccioli’s bravery as well, one more culturally charged than bright colors and an out-to-there dress. With its crafty embroidery and tiered wool fringe, the dress introduced the collection’s folk undertone, inspired in part by a series of Avedon photos. The references continued in intricate intarsia motifs and high, tasseled hats, the results beautiful and celebratory. “I respect the diversity of different people,” Piccioli said, when asked if he hesitated to make even nonspecific tribal references. “I feel that at this moment it’s important to talk about tolerance and inclusivity.…The idea of folk is the idea of being very close to your identity. It’s not one inspiration. It’s about different women, different cultures, different identities, all mixed together in somebody’s dream.”

That dream indeed wended through countless identities, from highly decorative by night (a huge fringed, embroidered cape in velvet, crepe and lamé worked into an elaborate landscape motif) and day (an incredible navy cashmere floral intarsia coat) to regal (a range of rich-hued goddess dresses) to serene (an ivory cashmere column with a metal bow bodice). And oh, yes, sportif. Because isn’t chic sportif the essence of Lauren Hutton, one of Piccioli’s diverse lineup of models? One by one, the looks achieved the designer’s goal of glorious individuality. As a collection, they held together like glue.

If you’re the kind of person who can be moved by clothes, Piccioli’s shoved you into the next time zone. The emotion only heightened when he came out for his bow with his entire atelier staff, sharing with them the audience’s enthralled appreciation. The white-coated atelier brigade, in turn, lingered, each paying individual respect to Mr. Valentino. Bellissimo, in every way.