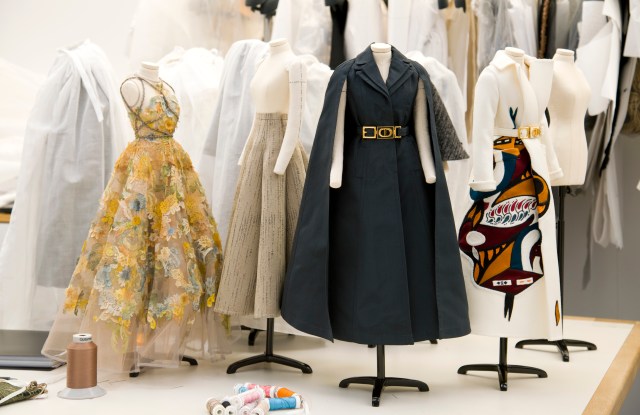 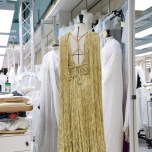 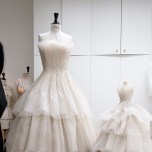 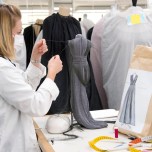 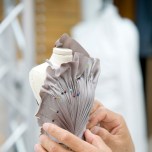 Lockdown can make anyone a little stir crazy. For Maria Grazia Chiuri, who spent a month without setting foot outside her Italian home, art provided a form of escape.

Her fall haute couture collection for Dior was inspired by female Surrealist figures such as Dora Maar, Leonora Carrington and Lee Miller — and Chiuri gave the presentation an unexpected twist of her own, producing the outfits at miniature scale and presenting them on mannequins housed in a trunk shaped like Dior’s headquarters on Avenue Montaigne.

“To think about creativity, to dream, was very good, because it gives you hope for the future,” the designer, wearing a white surgical mask, said during a preview at her office in Paris. “I think art is very important in this moment.”

Since physical haute couture shows were canceled this season due to the coronavirus pandemic, Chiuri decided to produce a traveling display — call it a fresh spin on her Dior Around the World capsule line of ready-to-wear and luggage. Adding a dose of fantasy, she tapped Italian director Matteo Garrone to make a film showcasing the trunk being carried through a magical forest.

“During the lockdown, I saw many articles about the digital world, but honestly, fashion is not only digital. It’s not something you can only see. You have to touch it, you have to see the craftsmanship, especially in couture,” she explained. “In this way we can send the collection around the world to our clients.”

The concept was inspired by the Théâtre de la Mode, a traveling theater of miniature fashions devised by the Chambre Syndicale de la Couture Parisienne after World War II to revive an industry ravaged by wartime shortages and German occupation. Its 237 doll-size figurines toured European cities in 1945, and the event was reprised in the U.S. the following year.

The Dior haute couture ateliers are making two sets of 37 outfits, each reproduced at 40 percent of the original size. “All the dresses are really couture dresses. We made them in the real proportions with the real textiles, with the real craftsmanship,” Chiuri said. “It’s playful, but it’s real. You have to see yourself in a dress.”

A behind-the-scenes shot of the Dior short film directed by Matteo Garrone.  Photograph by Leslie Moquin/Courtesy of Dior

Inside the Paris atelier, a masked seamstress leaned over a mannequin on her sewing table to painstakingly hand-pleat the bodice of an ivory raw silk gauze ballgown with a tiered, fringed skirt. She lifted the cover on the tailor’s dummy beside her to show visitors the original lifesize version.

At another station, one of her male colleagues was working on the shrunken version of a pleated chiffon intarsia skirt in a tree bark motif, to be attached to a beaded lattice top.

It wasn’t the first time that Chiuri has worked a Surrealist theme — her spring 2018 couture collection featured Op Art patterns and cage-like constructions — but this time, her take was less literal, focusing on the essence of a group of women that she described as modern, independent and transgressive.

For day, the designer stuck with house staples like a gray pleated Bar jacket with a matching razor-pleated skirt, or a white belted cashmere coat with a striking appliqué motif inspired by French painter Jacqueline Lamba’s tarot designs.

The collection took flight after dark, with eveningwear including a metallic yellow draped Grecian column dress with bondage-style ropes criss-crossing the torso; a sculptural black ruffled cape, and a vaporous ballgown covered in pale gray ostrich feathers that wafted like an apparition.

A behind-the-scenes shot of the Dior short film directed by Matteo Garrone.  Photograph by Leslie Moquin/Courtesy of Dior

Garrone’s movie, titled “The Dior Myth,” took viewers on a wordless journey to a wood filled with fairy-tale creatures like a siren, nymphs, a faun and a woman emerging from a giant shell. The images recalled the director’s 2015 fantasy film “Tale of Tales.”

As twin porters carried the trunk of clothes through the forest, characters including a stone statue of Venus choose the dress of their dreams, appearing at the end clad in their new vestments. “We really wanted a tale about this idea of the magic dream of couture,” Chiuri said.

It’s something of a departure for Garrone, known for hard-hitting fare like his mafia thriller “Gomorrah.” His most recent, an adaptation of “Pinocchio” starring Roberto Benigni, saw its French release scuppered by the COVID-19 outbreak.

“He doesn’t know anything about fashion in general,” said Chiuri, noting this season’s limitations encouraged her to think outside the box. “I think that everybody has to reinvent their way of working.”

Stephen Jones made some miniature berets with veils to accessorize the looks. The milliner has actually seen the Théâtre de la Mode, which is housed at the Maryhill Museum of Art in Goldendale, Wash., and welcomed the opportunity to work on an updated version of the idea.

“It just seemed the most wonderful thing for now because everything is such bad news. To have something which is charming and wonderful and beautiful is the tonic that the world needs. In times of trouble, we do need things to cheer us up,” he said.

During the lockdown, the house’s petites mains continued to produce orders from home, staying in touch with each other via Zoom. Their pint-sized creations for fall are marvels of skill and precision, and a tiny reminder of couture’s haute resilience.