Moving on from T-shirts and white shirts, Olivier Saillard looked to 8XL suits for his fourth exercise in couture re-creations. 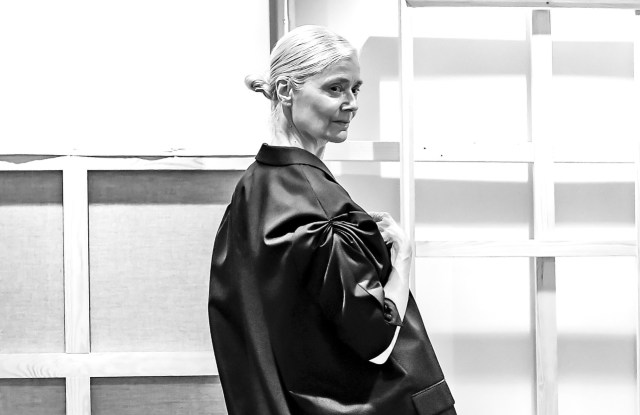 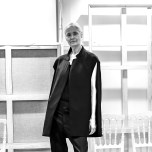 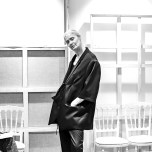 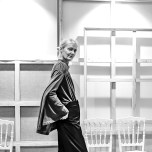 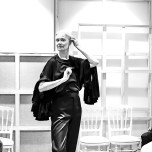 For the fourth iteration of his Moda Povera project, Olivier Saillard cast an eye on inexpensive suits sold by French retailer Kiabi, selecting the 8XL size as his base material.

“I like ordinary clothes. When I was director of the Galliera museum, someone asked me how I would explain how humans dress to an alien. At the museum, we had Schiaparelli, Balenciaga but nothing you’d see on the streets,” he said after one of a series of intimate showings in his Parisian atelier.

Saillard’s point with Moda Povera isn’t strictly to create a couture line, but to make a point about luxury and to ensure that artisanal techniques aren’t lost as their practitioners retire. “We preserved the techniques of Madame Grès on jackets and trousers, but this time, we also asked a former Balenciaga artisan to teach us the art of the shoulder and sleeves,” he said in an introductory comment.

He applied those techniques to turn what the comically large jacket and trousers, at an initial cost of 45 euros and 25 euros, respectively, which model Axelle Doué wrapped around herself to show how large they were, into a series of elegant reimagined items.

Some 40 silhouettes later, all modeled by Doué, Saillard had made a point about cheap fabrics. “People assume that the most beautiful dresses can only be made from exquisite materials, and that couturiers can only use upscale fabrics. It’s simply not true. For Madame Grès pleats, you just need patience,” he said, adding that synthetics had long been an area for innovation, then and now, with eco-friendly options making man-made materials more responsible.

In this lineup of bolero jackets, sleeveless vests, draped trousers or kimono-esque shapes, the sharp-eyed observer could find touches of Madame Grès, hints of Balenciaga or nods to Poiret. The handful of T-shirts in the mixed looked positively regal.

“Constraint is the best crucible for ideas. Whatever one’s means, you have to invent your own life,” he said, adding that one possible development he had in mind for Moda Povera could be traveling workshops to teach couture techniques to help preserve them.